As part of his March PIOMAS gridded sea ice thickness update Wipneus also produced this graph of sea ice export from the central Arctic via the Fram Strait:

So far this winter export has been remarkably subdued, but that has now changed. A persistent dipole with high pressure over Greenland and low pressure over the Barents Sea is generating strong northerly winds in the Fram Strait, and even bringing some April snow showers to South West England:

Precisely how high the pressure has been over Greenland is the subject of much debate. See for example this discussion on the Arctic Sea Ice Forum about whether a new world high pressure record has just been set. Different weather forecasting models have come to very different conclusions about the mean sea level pressure of a high pressure area situated over the Greenland ice sheet, which reaches an altitude of over 3,000 metres. Here’s GFS for example, showing 1097 hPa at 06Z on April 4th:

whereas the Canadian Meteorological Centre synopsis for the same time shows a mere 1070 hPa:

At least all the assorted models agree that the isobars are closely packed over the Fram Strait, and hence some of the thickest sea ice remaining in the Arctic is currently heading towards oblivion in the far north Atlantic Ocean:

END_OF_DOCUMENT_TOKEN_TO_BE_REPLACED

Arctic sea ice volume is of course far more important in the grand scheme of things. However sea extent is easier to measure, and the JAXA AMSR2 flavour thereof has now nudged into second place for the date above 2016:

The PIOMAS gridded thickness numbers have been released, to reveal this end of October thickness map:

and these calculated volume graphs:

These show Arctic sea ice volume to be lowest for the date, even if extent has slipped into 2nd place.

For comparison purposes here too is the latest AWI CryoSat-2/SMOS merged thickness map:

END_OF_DOCUMENT_TOKEN_TO_BE_REPLACED

Modelled volume is now in a “statistical tie” with 2012 for lowest on record for mid October. Here too is the PIOMAS thickness map:

Meanwhile for comparison purposes here is the first merged Cryosat-2/SMOS thickness map of the 2020/21 freezing season, hot off the presses at the Alfred Wegener Institute:

END_OF_DOCUMENT_TOKEN_TO_BE_REPLACED

A detailed dissection of the 2020 minimum of various Arctic sea ice extent metrics can be found on a dedicated thread. All other Arctic news in September will be found below. As is usually the case, let’s set the ball rolling by taking a look at Wipneus’s visualisations of the August PIOMAS gridded thickness data:

together with the computed volume:

END_OF_DOCUMENT_TOKEN_TO_BE_REPLACED

I’ve been waiting for the results of the ARCUS SIPN August call, but despite the timetable specifying “26 August 2020 (Wednesday)” they’ve still not been published and I can wait no longer!

Hopefully the August “predictions” will be available soon, but for the moment let’s take a look at the July 2020 Sea Ice Outlook instead:

Next here’s JAXA/ViSHOP extent, generally assumed to be a “2 day average”:

Next here’s the DMI version, which neglects to include 2012:

END_OF_DOCUMENT_TOKEN_TO_BE_REPLACED

Our title today is shamelessly plagiarised from the “Watts Up With That” blog of our old friend Anthony Watts. However daring to be different we have redacted the initial word “Claim -“.

The WUWT blog post is bylined “Charles Rotter”, and refers to a new paper in the journal Nature Climate Change entitled “Sea-ice-free Arctic during the Last Interglacial supports fast future loss“. Here’s an extract from the abstract:

The Last Interglacial (LIG), a warmer period 130,000–116,000 years before present, is a potential analogue for future climate change. Stronger LIG summertime insolation at high northern latitudes drove Arctic land summer temperatures 4–5 °C higher than in the pre-industrial era. Climate model simulations have previously failed to capture these elevated temperatures, possibly because they were unable to correctly capture LIG sea-ice changes. Here, we show that the latest version of the fully coupled UK Hadley Center climate model (HadGEM3) simulates a more accurate Arctic LIG climate, including elevated temperatures. Improved model physics, including a sophisticated sea-ice melt-pond scheme, result in a complete simulated loss of Arctic sea ice in summer during the LIG, which has yet to be simulated in past generations of models. This ice-free Arctic yields a compelling solution to the long-standing puzzle of what drove LIG Arctic warmth and supports a fast retreat of future Arctic summer sea ice.

There’s no mention of “2035” in there, so let’s look instead at yesterday’s press release from the British Antarctic Survey:

END_OF_DOCUMENT_TOKEN_TO_BE_REPLACED

A new month begins today, and at the moment it looks as though it’s going to be the most interesting one since August 2012. Here once again is the satellite image of the enormous cyclone that was spinning over the Beaufort/Chukchi Seas just a few days ago:

END_OF_DOCUMENT_TOKEN_TO_BE_REPLACED

The new month starts with JAXA extent “lowest for the date in the satellite record” by a whisker:

The high resolution Arctic sea ice area and extent graphs based on the University of Hamburg’s AMSR2 concentration data are also in “statistical ties” for that honour, in records going back to 2013:

END_OF_DOCUMENT_TOKEN_TO_BE_REPLACED

As is our current habit this month’s report begins with the high resolution Arctic sea ice area and extent graphs based on the University of Hamburg’s AMSR2 concentration maps: 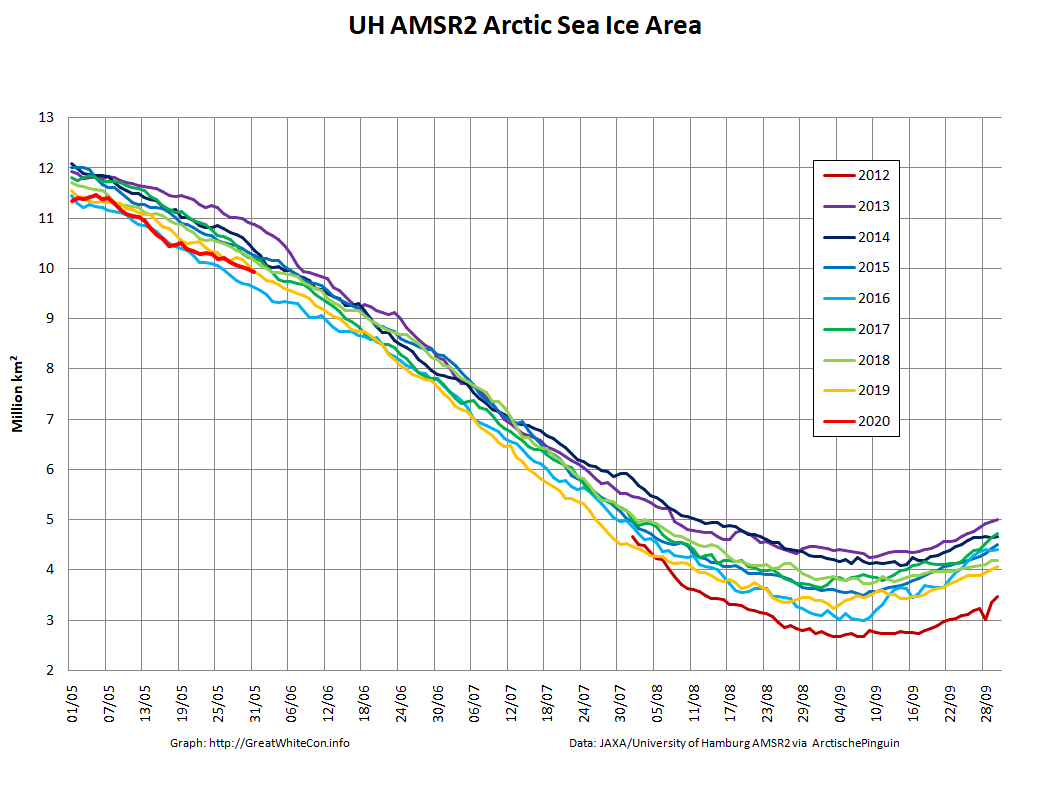 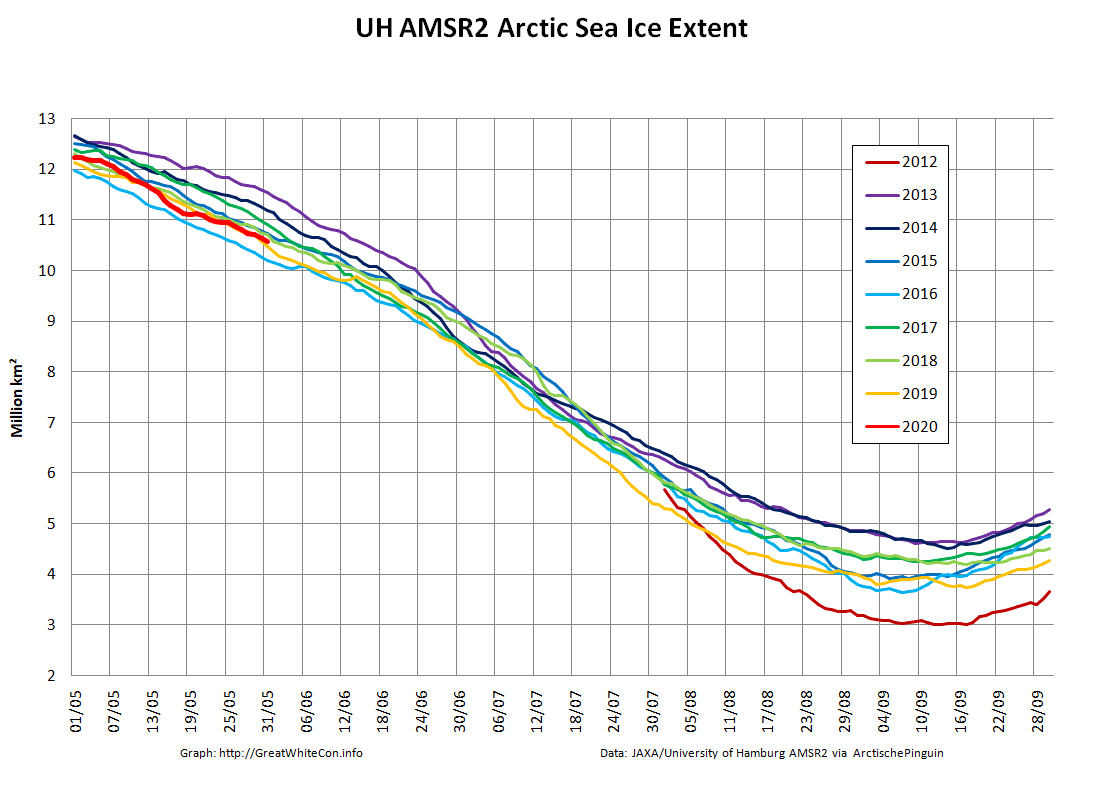 Area and extent are currently vying for second place with 2019 on the “lowest for the date” leader board, a little behind 2016 at this point in the 2020 melting season.

END_OF_DOCUMENT_TOKEN_TO_BE_REPLACED

Let us begin this month’s report from the far north with the high resolution Arctic sea ice area and extent graphs based on the University of Hamburg’s AMSR2 concentration maps:

Area is currently lowest for the date in the AMSR2 record. After briefly occupying that position extent has increased over the last few days of April due to winds causing sea ice to move in the direction of the far North Atlantic: