Having rounded Cape Chelyuskin yesterday Northabout has now come across some serious sea ice in the Laptev Sea. The crew are posting regular updates on conditions. Here’s a recent example: 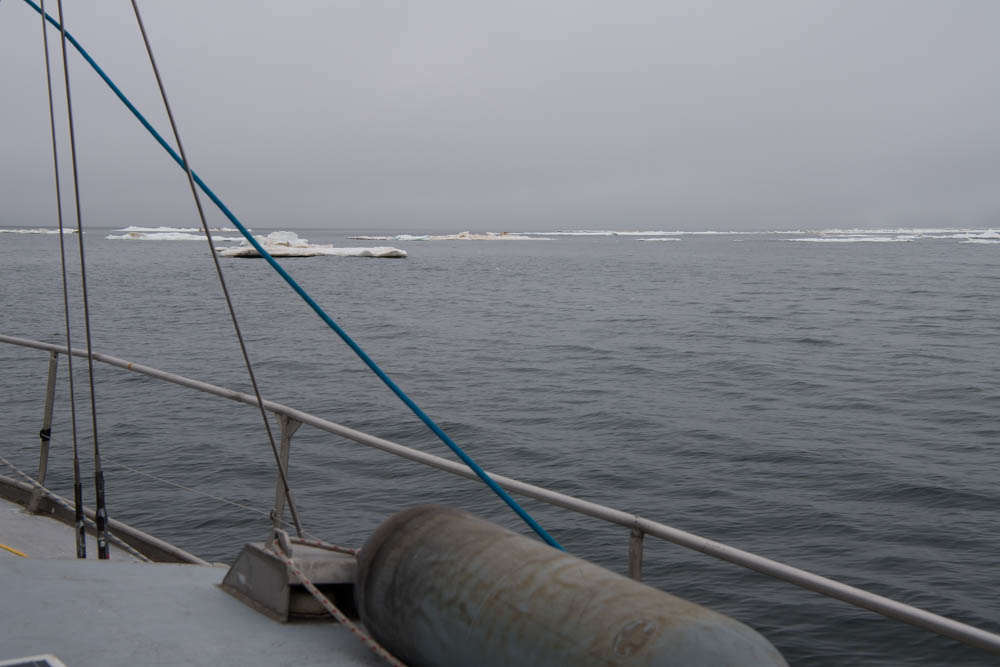 Having anchored against some land-fast ice overnight Northabout is on the move once again: 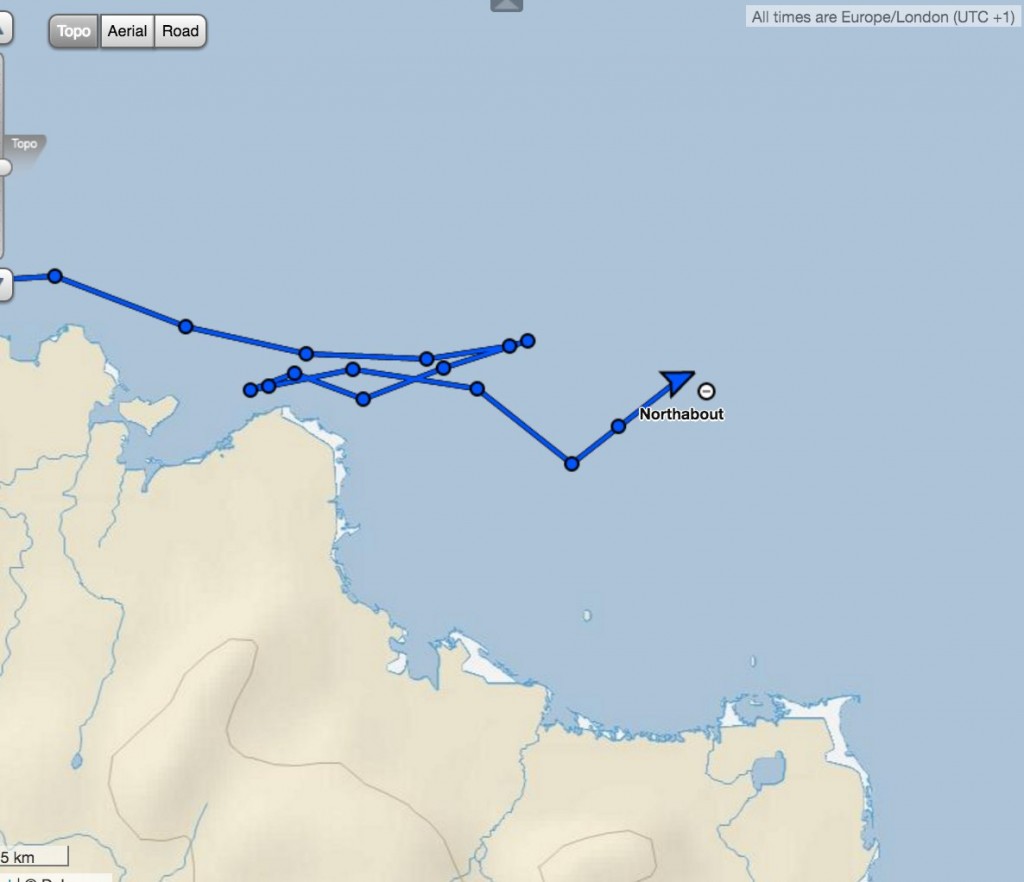 Not before indulging in some strenuous early morning exercise though!

Northabout made further progress yesterday and anchored last night in the shelter of Ostrov Volodarskiy: 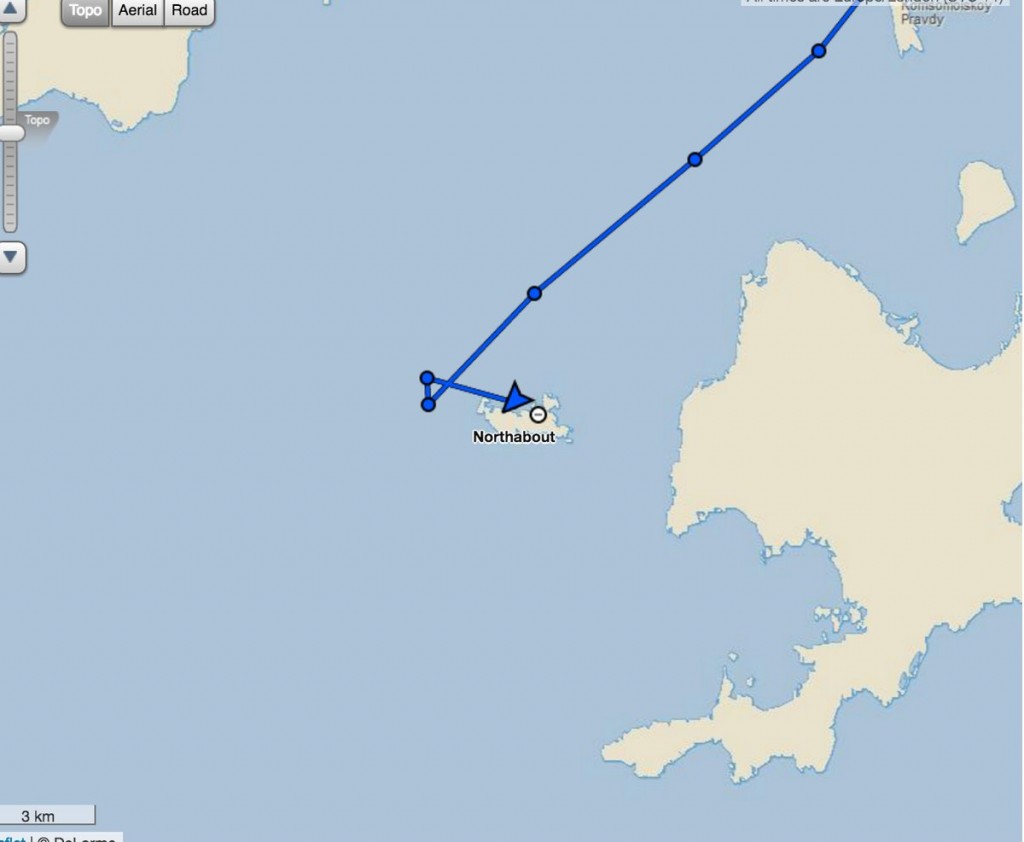 There seems to have been less sea ice in attendance than the night before! 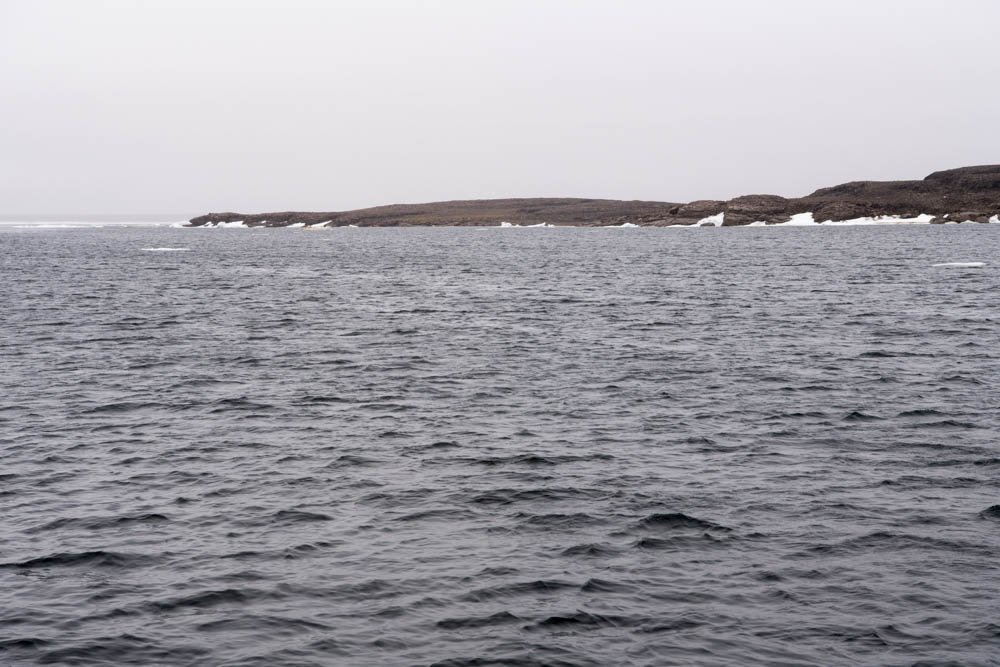 Northabout is now approaching the area in which the most recent AARI forecast suggests there will be sea ice all the way to the coast: 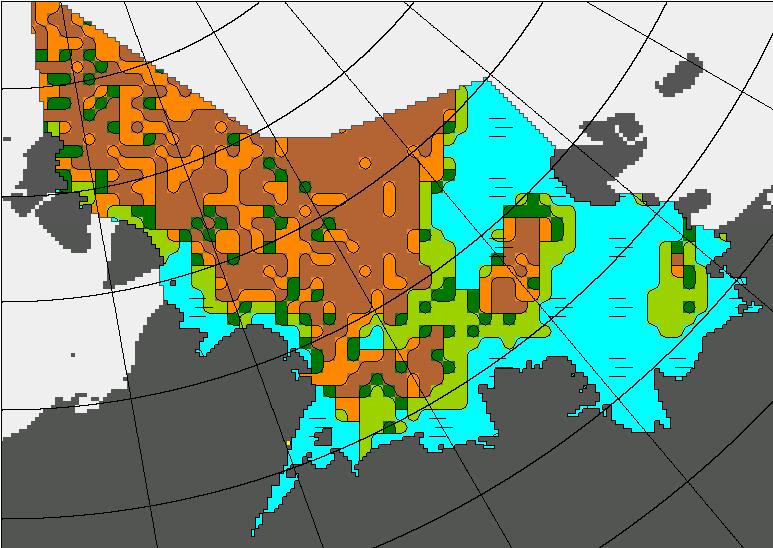 Will the hoped for winds have done their work by tomorrow?

The wind and sea state were really picking up. Our options were few. Wind and tide against us, really shallow water of 5m , small bergy bits in the water to miss. NO shelter whatsoever. Do we make our way back the 40 miles where we knew a good anchor spot ? At this rate it would take us 11 hours, using up precious diesel. In the end a nice large floe came into sight, so we gingerly approached, and my comrades made the boat secure. It would protect us from the sea state like a pontoon, and protect us from the mass of ice coming our way. My watch finishes at 12 and I got into my pit at 3.30am.

To our surprise, the floe was moving at 1.3 knots, so up again to move. The strong winds were driving huge belts of pack ice our way, we didn’t want to be caught up against the shore. So, off towards our anchorage, and then a nice large ‘Stamukha’ appeared. Russian for ice that has grounded on the bottom, so not moving. Another mooring. This time it felt safe, so a good couple of hours sleep,

This morning it looks like they are still anchored to that Stamukha: 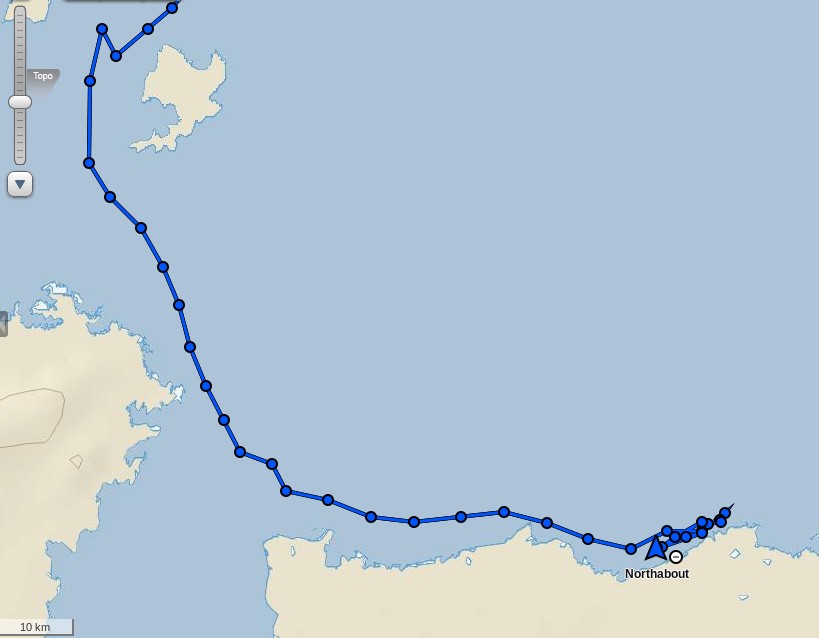 Here’s a picture of their anchorage the previous night:

and moving pictures of Northabout mooring to the “stamukha”. 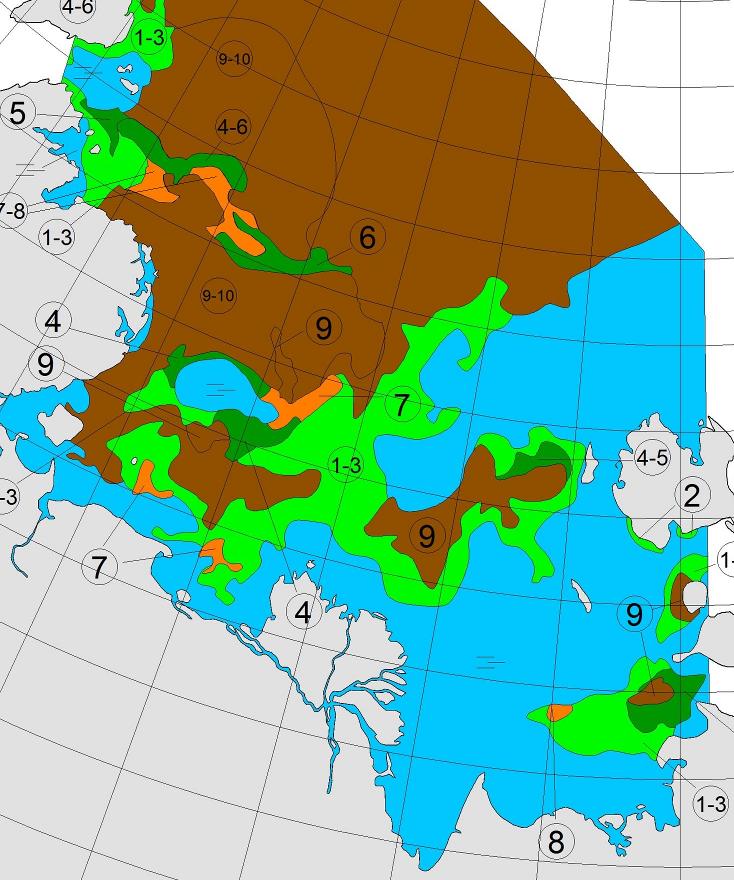 which still shows a considerable length of the coast of the Taymyr Peninsula beset by 9/10 concentration sea ice. However Sentinel 1A imaged that coast just before midnight last night. Here’s what it revealed: 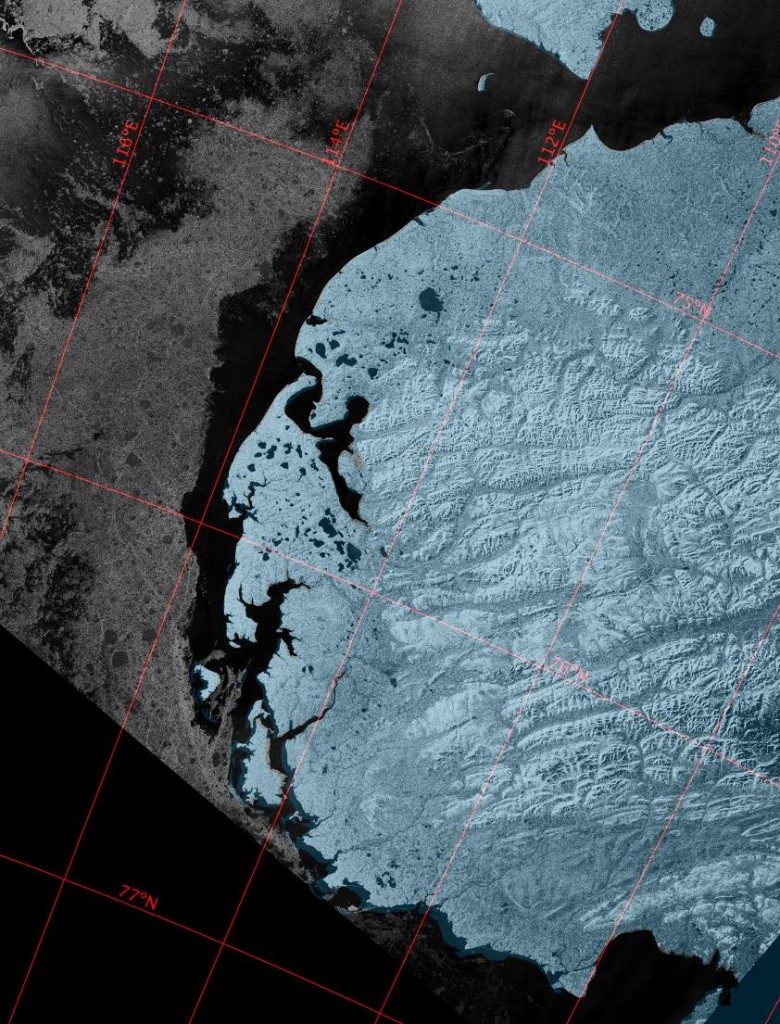 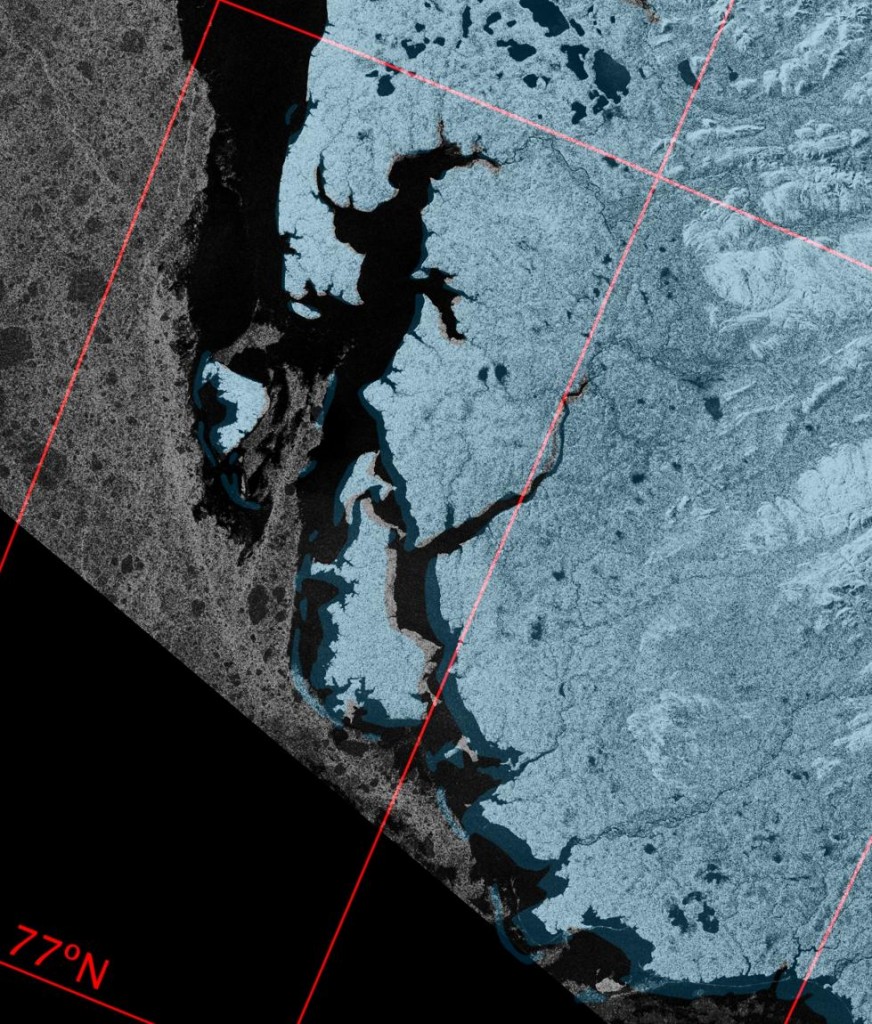 So near and yet still so far for Northabout? If last night’s Sentinel 1A images are to be believed the worst is now behind the Polar Ocean Challenge team, until the winds of the forthcoming “Great Arctic Cyclone” of 2016 arrive at least? Here’s the current ECMWF forecast for early Monday morning, courtesy of MeteoCiel: 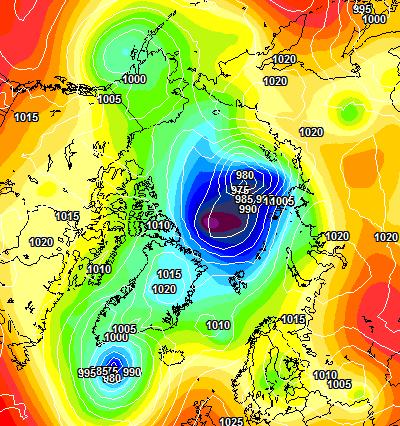 After inspecting a possible route to the east of Ostrov Severnyy, the crew of Northabout have decided that:

We have had to go and find shelter tonight. A huge storm on the way, and high wind, in shallow waters with masses of ice driving your way, is no place to hang around to see what might happen.

So, now at anchor, all tired, excited after today, and looking forward to the next hurdle – I think! As I write, the wind is gusting 30 knots, so clever to run for shelter. 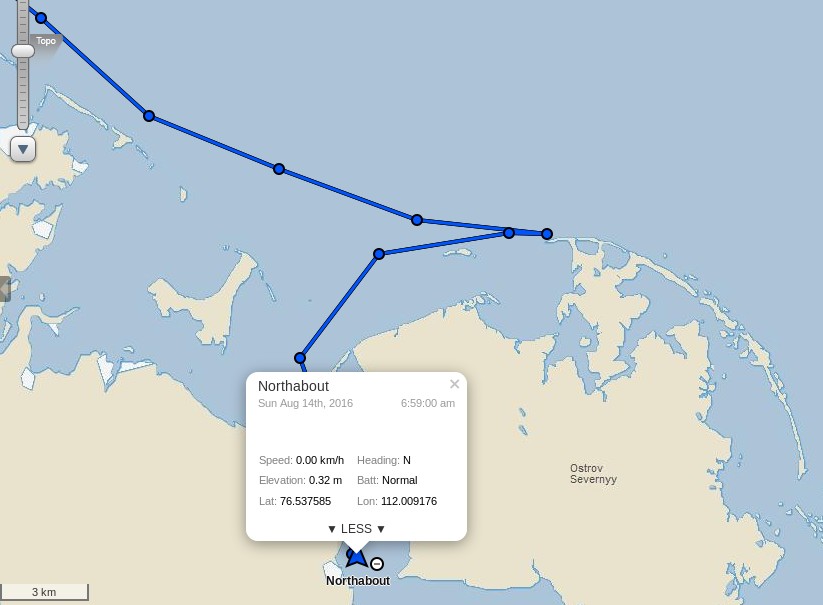 The Sentinel image from last night isn’t very clear, and today’s MODIS images are rather cloudy so here’s one from yesterday:

It shows that the winds had already opened up a fairly ice free channel past Ostrov Severnyy, and also the smoke that Northabout’s crew reported smelling yesterday:

Well, as predicted from the Grib files, winds slowly increased throughout last night to 35 and gusting much higher. Also, as predicted, the temp rose to an amazing 17 degrees today! In the morning, I also got the distinct smell of wood smoke. Maybe a forest fire 500 miles south and the smell drifted with the wind. At one point, we slipped the anchor, so good we had an anchor watch and wise to find shelter, no ice, 7m of depth, surrounded by land but still bouncing about like a cork.

In the wake of the cyclone they are sailing south again today, apparently unhindered by sea ice: Northabout has made good progress overnight: The skies are clear this morning over the south-west Laptev Sea:

The next question is which side of Ostrov Bol’shoy Begichev will Northabout pass? All the indications are that the answer will be to the east.

Whilst we wait for that to be confirmed, here is some video footage of Northabout passing Ostrov Andreya on August 13th: Northabout has encountered yet more sea ice. According to the “Crew Blog” of Ben Edwards:

Over night we’d sailed into ice. I know, I said we shouldn’t be troubled by ice for a bit, I was wrong. The ice on its own wasn’t too bad, the thing was we had fog as well. The fog was terrible, we could barely see five meters in front of the prow and the ice just kept on coming. After a bit the fog went, thankfully, the ice didn’t. Eight hours later when I’m back on watch we still had ice and even better, we had to divert to avoid a sandbank. Then the fog came back, typical. Luckily after another two and a half hours the ice began to clear a bit, for now.

Despite the ice, fog and sandbank Northabout is still making good progress across the Laptev Sea, and is currently sailing past the delta of the Lena River: