After a comparatively cool May, surface air temperatures in the high Arctic are back up to “normal”: 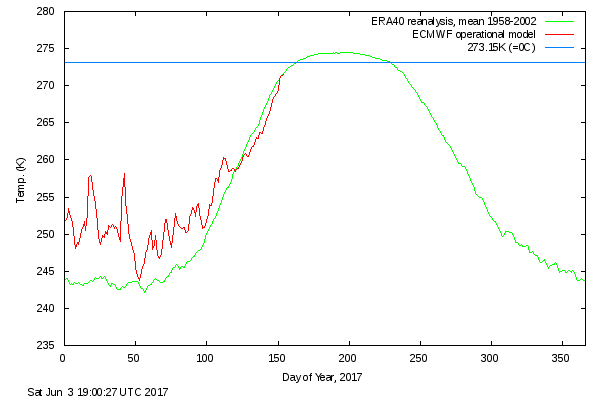 The condition of the sea ice north of 80 degrees is far from normal however. Here’s what’s been happening to the (normally) land fast ice north west of Greenland:

Further south surface melt has set in across the southern route through the Northwest Passage: 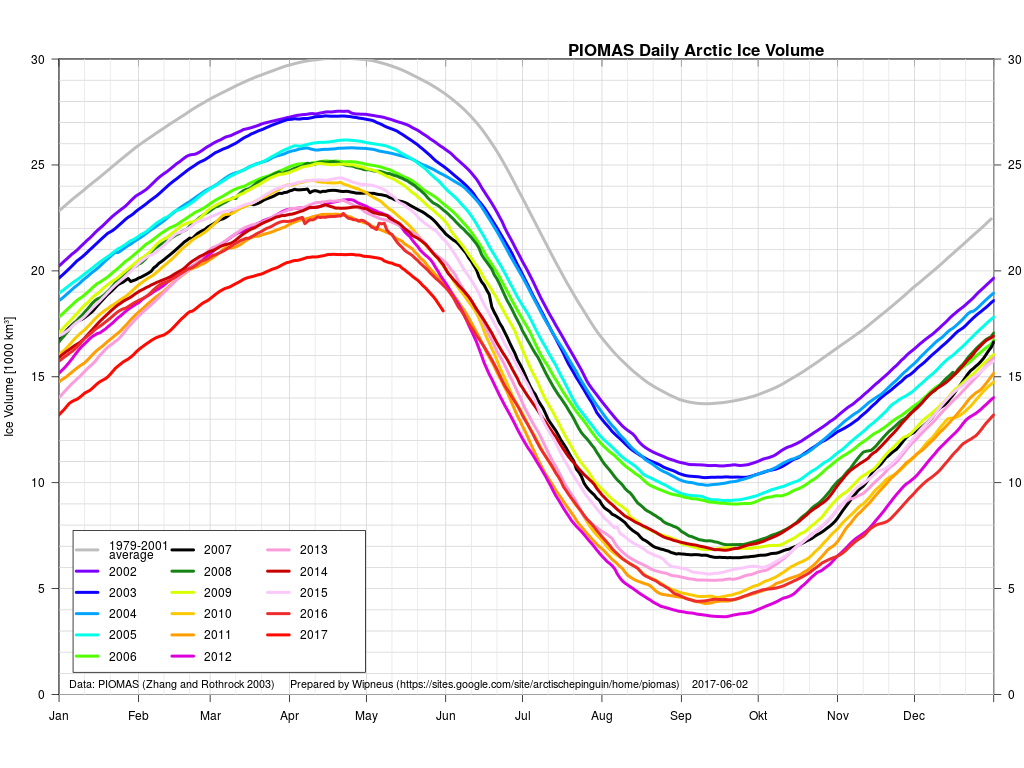 The PIOMAS gridded thickness graph suggests that a large area of thick ice is currently sailing through the Fram Strait to ultimate oblivion: 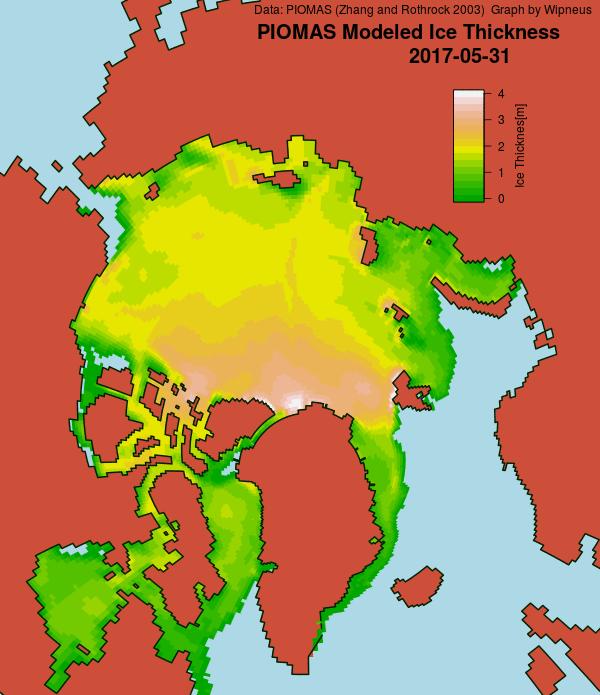 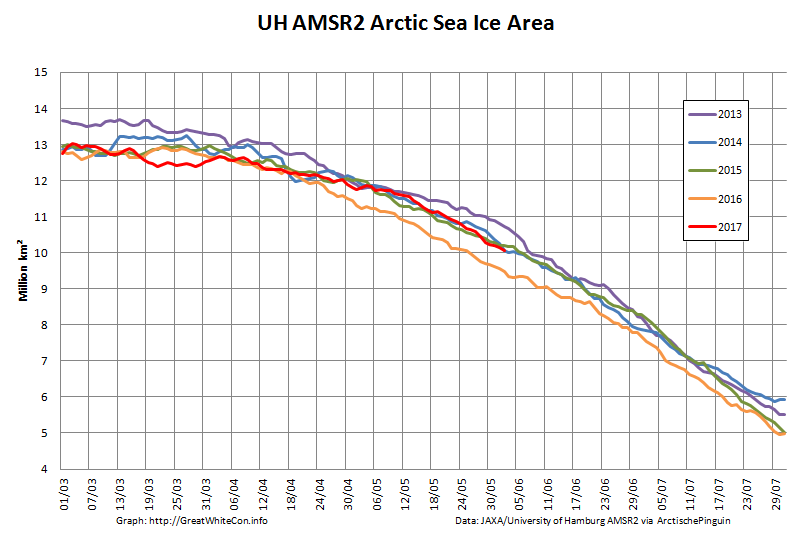 and just in case melt ponds are now affecting those numbers here is extent as well: 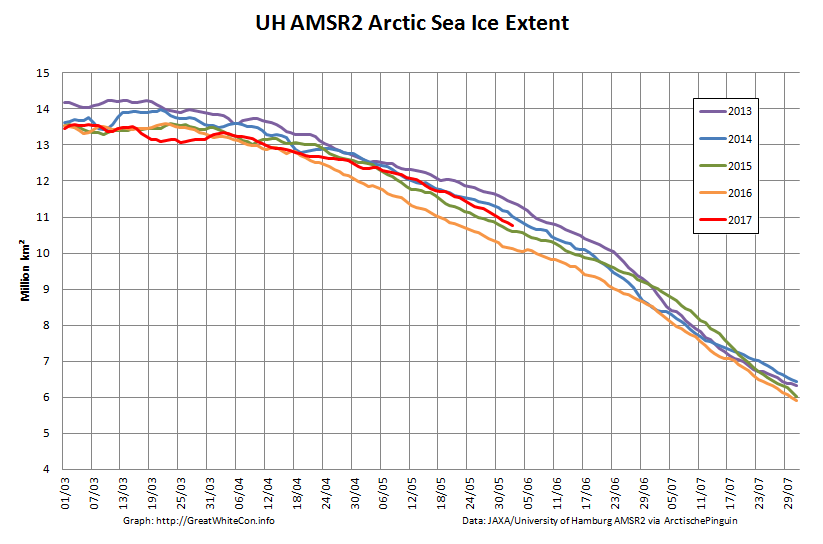 The rate of decrease is inexorably increasing! 2012 extent is currently still well above that of 2017, but those positions may well be reversed by the end of June? Here’s NSIDC’s view on the matter: 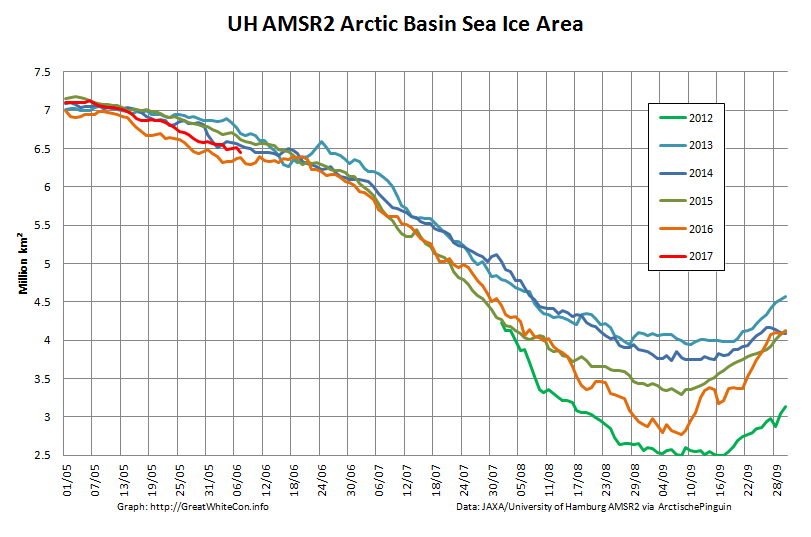 This includes the Beaufort, Chukchi, East Siberian and Laptev Seas along with the Central Arctic. It excludes the Atlantic periphery, which currently looks like this: 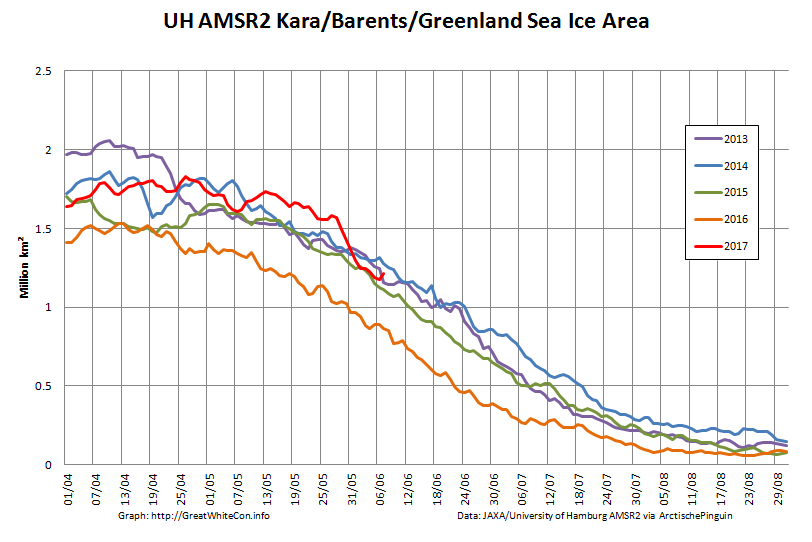 At long last a clear(ish) image of water from the Lena Delta spreading out across the fast ice in the Laptev Sea: 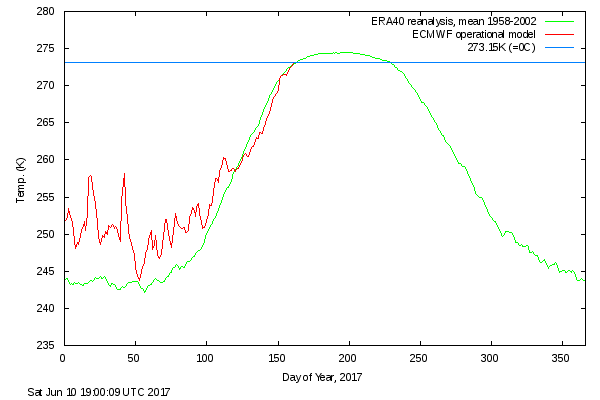 We calculate our freezing degree days on the basis of the freezing point of Arctic sea water at -1.8 degrees Celsius. On that basis this winter’s grand total of 3740 was reached on June 1st: Despite the “coolish” recent weather total FDDs are way below the climatology and other recent years. Consequently there’s a lot less sea ice in the Arctic left to melt at the start of this Central Arctic melting season than in any previous year in the satellite record. However whilst there are some melt ponds visible in the Arctic Basin on MODIS, in that respect 2017 is lagging behind both last year and 2012. 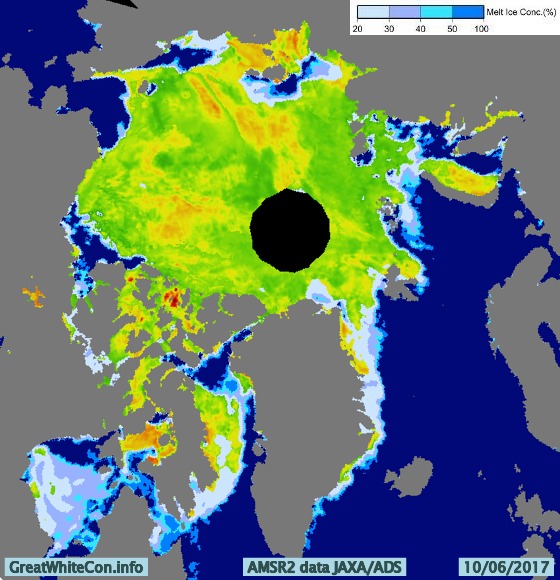 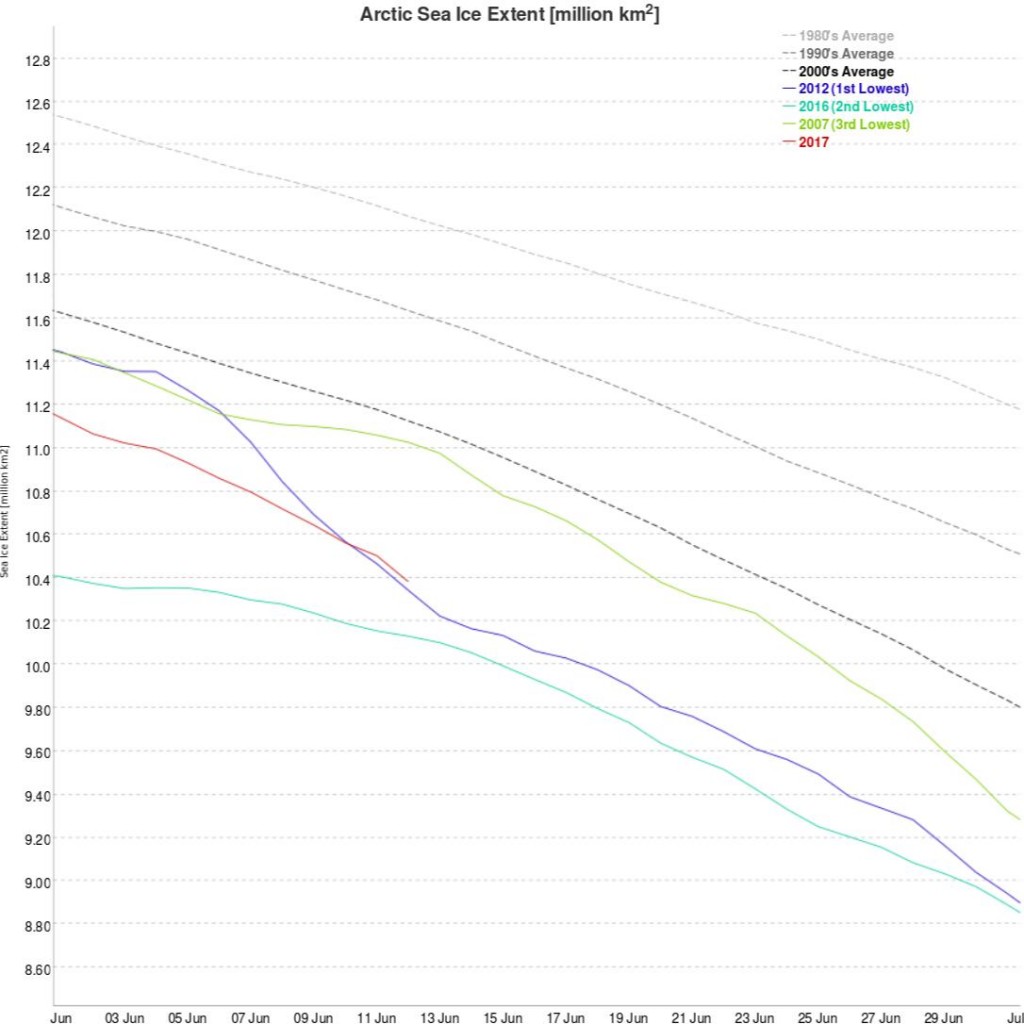 Meanwhile there are finally signs of some surface melt on the fast ice in the Laptev Sea:

An animation of the latest Arctic sea ice age data from Mark Tschudi:

Further confirmation that in 2017 the older, thicker ice is gathered together on the Atlantic side of the Arctic Ocean.

The Mackenzie River melt waters have now breached the fast ice off the delta:

Thanks to the sterling work of Wipneus on the Arctic Sea Ice Forum, here’s a regional breakdown of PIOMAS Arctic Sea Ice volume for the month of May: 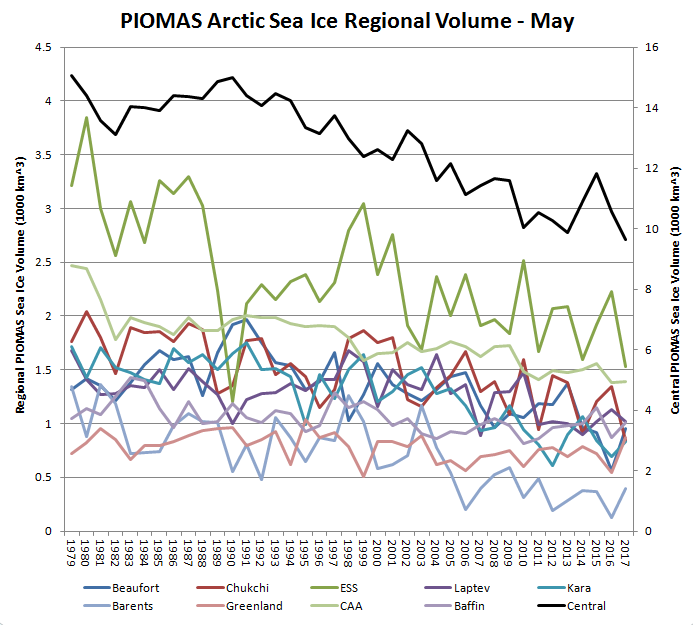 Note the caveat – “No checks, but the data looks plausible”.

The AMSR2 data feed from the University of Hamburg suffered from a “brief hiatus” a few days ago, but is now back in action: Yesterday’s data still hasn’t arrived, but it certainly looks as though 2017 extent will soon drop below 2016.

The PIOMAS mid month volume update has arrived. The gap between 2012 and 2017 is closing fast: Here is the ECMWF MSLP forecast for 96 hours time: A sub 970 hPa cyclone is starting to enter the realms of realistic possibility, and also forecast are some significant waves in the Chukchi Sea and the expanding 2017 “Laptev Bite”: The forecast cyclone was nowhere near as deep as predicted. According to the analysis by Environment Canada it bottomed out at 980 hPa yesterday:

O-Buoy 14 is currently firmly embedded in the fast ice of Viscount Melville Sound, deep in the heart of the Northwest Passage. Here’s the view from the buoy’s camera: and here’s the view from space: