Our regular reader(s) will be already be all too familiar with the 2015 edition of our annual Great White Con 2016 “New Einstein” Award. The jury has now finished its deliberations in a smoke filled igloo just outside the Great White Con Ivory Towers. I am pleased to be able to announce that the first prize of the loan of a polar bear suit kindly donated by the Daily Telegraph plus a battered big board from Cotty’s quiver has been awarded to none other than Gail Combs with her:

Jim, How does it feel to be morally responsible for the deaths of thousands of people a year?

I’m not quite sure how we’ll get the good news to Gail in time for her to take part in the 2016 Great White Con Arctic Basin Big Wave (Fantasy?) Surfing Competition, since she abused us in her capacity as a regular commenter on “Steve Goddard’s” (un)RealScience blog, where imparting such messages is most certainly a non trivial task. Watch this space!

You will no doubt be overjoyed to learn that we already have several candidates in the running for our 2016 award, the first of which is in similar vein to Gail’s winning 2015 entry. Here they are:

1) Gary P Jackson, who claims in his Twitter profile to be a “Texan, Palinista, Conservative Activist, DragRacer Editor & Publisher”, with:

2) Anthony Watts, who is the proprietor of what he claims is “The world’s most viewed site on global warming and climate change”, has of course already “blocked” the message he doesn’t care to hear: 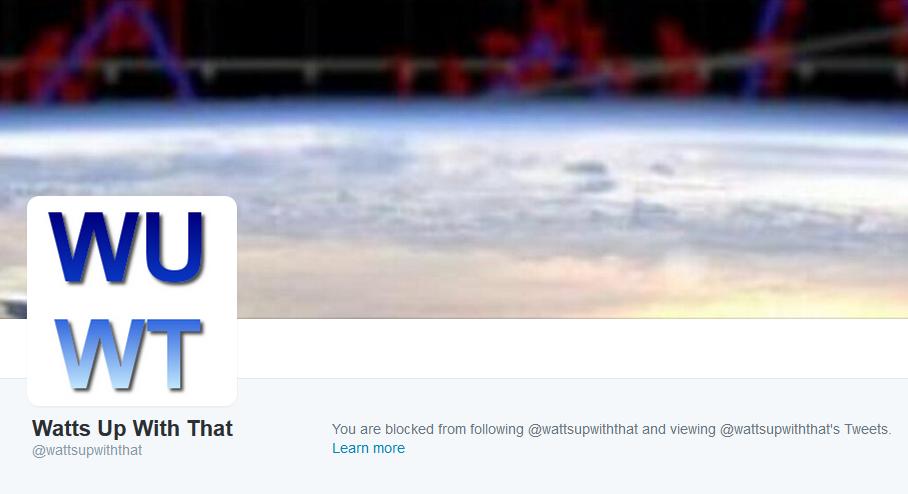 Without offering a single shred of evidence for his baseless assertions Anthony had this to say on the “Climate Etc.” blog of Professor Judith Curry:

You two guys are quite the pieces of work. You both operate under multiple identities. Jim Hunt has three I have been able to identify, Lawrence Martin/Martinez has two.

Both of you post off topic or disrupt threads with the sort of unsubstantiated nonsense you post above, and both demand to have these off topic comments heard and then play the “look Watts is censoring me!” game when your comments don’t meet our site comment policy and/or are abusive in nature.

Plain and simple, if you comment under different identities, post off topic and/or thread disruptive comments you don’t get to participate. Mr. Hunt was warned months ago, yet he still persists in trying to get comments through under other identities such as V2G.

3) Chris Comber, who claims to be a “Mac User, ebay addict, Re-enactor & Designer” and who has of course already “blocked” the message (s)he doesn’t care to hear:

Chris is apparently keen on the #Brexit concept, and (s)he blasted out an extended sequence of (comparatively!) mild ad homs culminating in:

4) CatWeazle666, who is an expert emitter of ad hominem attacks on the blog of “Steve Goddard” and it now becomes apparent also on the blog of Roger Helmer MEP, the United Kingdom Independence Party’s spokesman on Energy & Industry. CatWeazle’s entry is a stream of invective which eventually culminated (for the moment at least) in: 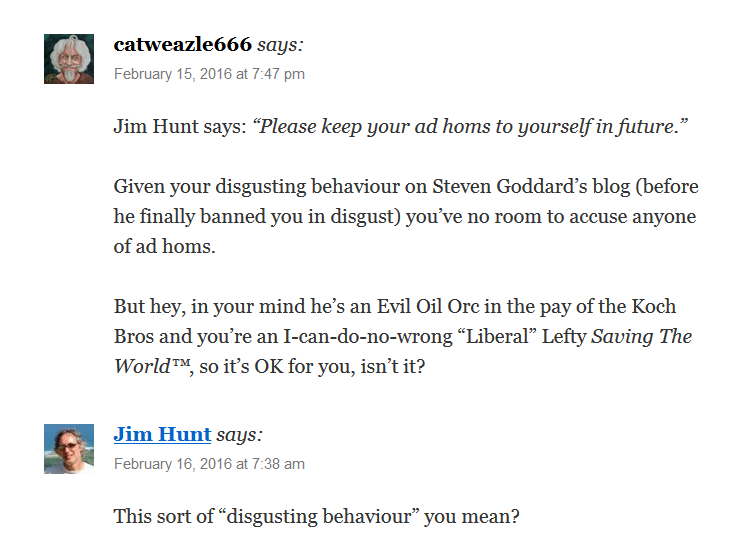 As you can see, there was no way I was going to take that lying down, and I in all the circumstances I felt compelled to bring the attention of Mr. Helmer and his merry minions to this link:

where many moons ago there appeared a well documented account of how “Steve Goddard” really is “the dumbest man on the internet” when it comes to analysing Arctic sea ice. Either that or he does have some idea of what he’s talking about but is nonetheless more than content to pull the wool over the eyes of his very own band of merry minions.

P.S. In response to my request for considered comment concerning 3 million deaths per annum due to outdoor air pollution CatWeazle666’s reply was:

What a sad little troll you are, Jim.

5) Ben Pile, whose Twitter profile tells us that he is a “Researcher, writer, blogger. Sceptical of environmentalism, environmental policy and the fashion for ‘evidence-based policy’. For science, against scientism”. Inevitably Ben is yet another “blocker” of scientific messages he doesn’t care to hear:

Ben evidently has a high opinion of himself, and thinks he knows more about climate science than IPCC lead author Professor Richard Betts:

He concluded his avalanche of ad homs aimed at yours truly with yet another undeleted expletive:

Unfortunately Ben then departed without offering me a series of swift apologies for his barrage of abuse:

6) Gator69, who is yet another expert emitter of ad homs on the blog of Tony Heller (AKA “Steve Goddard”).

Over at (un)Real Climate Science I humbly suggested under an article alleging “More Arctic Fraud From Mark Serreze And NSIDC” that it is difficult to prove that Amundsen “could have gone through [the Northwest Passage] in a few weeks”. Gator’s response?

Jim “could have” helped save 21,000 innocent humans yesterday, but he didn’t did he?

Jim thinks that snuffing out 21,000 innocent humans every day for his agenda is ethical and laudable.

“Could have” is an interesting phrase. How do you intend to justify this genocide Jim?

Please feel free to provide feedback to our 2016 jury in the space provided below.