This morning “Steven Goddard” quotes Lenin and Hitler with apparent approval. In an article entitled “Today’s Featured Climate Criminals – The Guardian” he closes with the following quotations:

“The most brilliant propagandist technique will yield no success unless one fundamental principle is borne in mind constantly and with unflagging attention. It must confine itself to a few points and repeat them over and over. Here, as so often in this world, persistence is the first and most important requirement for success”
– Adolf Hitler

The few points about the Arctic that Tony Heller repeats over and over look like this today:

The Guardian reports that Arctic ice is melting “faster and earlier”

Arctic sea ice is melting very slowly, and is nearing a mid-summer high for the past decade. 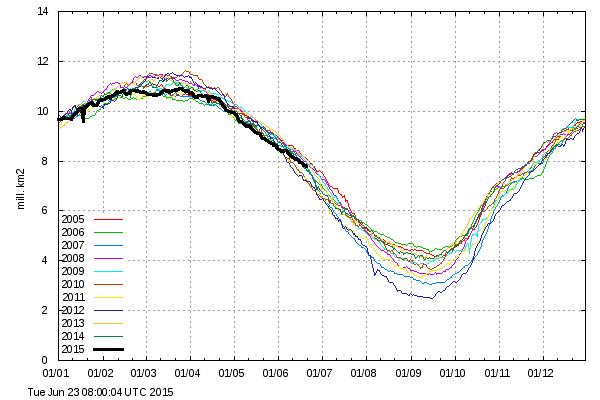 Arctic sea ice looked like this on June 20 – nothing like the fake picture in their May 5 article.

The Greenland melt season started more than a month late, and has seen below normal melt every day this year.

The Guardian report cited by Steve/Tony does in actual fact date from May 5th 2015. For an up to date alternative viewpoint see for example:

9 thoughts on “Does a Lie Told Often Enough Become the Truth?”