Whilst the Northern Sea Route has opened up early this year, it will be be quite some time before the Northwest Passage follows suit. Nevertheless our old friend Northabout is currently sailing in the direction of Baffin Bay, so now seems as good a time as any to start speculating about the prospects for the Summer of 2020. The passage through Lancaster Sound is already navigable:

However as the Canadian Ice Service chart also shows, there are still some areas of 7-8/10 concentration along the Beaufort Sea coast en route to the Bering Strait. The central Canadian Arctic Archipelago is solid 9-10/10 at present, but what’s the prognosis? Here’s the final CryoSat-2/SMOS merged thickness map of the winter, from April 15th:

This suggests that the thickest ice on the usual route through the Northwest Passage for small vessels was around 1.2 meters in Larsen Sound. This seemed suspiciously thin to me, so next I tried the underlying Cryosat-2 data from AWI, which revealed this:

Suspicions confirmed. It looks like AWI are ignoring CS2 data in the CAA for 2020! Here’s how the CPOM Cryosat-2 numbers look for a similar date, which is hopefully nearer the reality:

The CAA was fairly cloud free on June 23rd, and this satellite image shows that surface melt had started across the entire central section of the Northwest Passage:

All in all it looks to me as though “small vessels” will be able to successfully make it through the Northwest Passage later in the summer of 2020, with thicker ice drifting south into Larsen Sound from the McClintock Channel being a potential bottleneck.

Whilst there are certainly some cruise ships planning on voyaging through the Northwest Passage this summer it looks as though there will be very few yachts or other small vessels. According to Transport Canada:

To better protect Arctic communities, pleasure craft are prohibited from operating in Canada’s Arctic coastal waters north of the 60th parallel until October 31, 2020, at the earliest:

In the Canadian Arctic coastal waters, the following measures will not apply to:

Foreign pleasure craft exercising their right of innocent passage within the territorial sea. However, any such transits will be subject to receipt of a 60-day written notice in advance of arrival in Canadian Arctic coastal waters to Transport Canada, and be subject to any conditions the Minister determines necessary to ensure the protection of marine personnel and of local communities (for example, additional insurance, rescue strategy).

The skies were clear over the Northwest Passage yesterday, and this is what could be seen from the Aqua satellite:

I don’t know about you, but based on that image I reckon a plucky little yacht like Northabout could just about squeeze past the remaining sea ice along the coast of the Boothia Peninsula?

However let’s also take a look at the charts of the Canadian Ice Service shall we? The daily regional maps don’t cover the “squeeze point” yet, but the weekly map dated August 3rd reveals this:

We’re forced to conclude that officially the Northwest Passage isn’t quite “open” yet!

The Canadian Ice Service have extended their daily coverage to the “choke point” we looked at above:

The Northwest Passage is still not “officially” open!

The southern “choke point” is still blocking the way, and winds are currently pushing ice into the north of Peel Sound:

This Sentinel 2 image from August 6th shows the Bellot Strait to be completely clear of ice, so despite that route 6 through the Northwest Passage may well be very open soon.

Snow White is pleased to announce that she cut the ribbon at the 2020 Northwest Passage route 6 opening ceremony earlier today:

Whilst this is no doubt only temporary, the route along the coast of the Boothia Peninsula is now blocked by an area of 7-8/10 concentration ice: 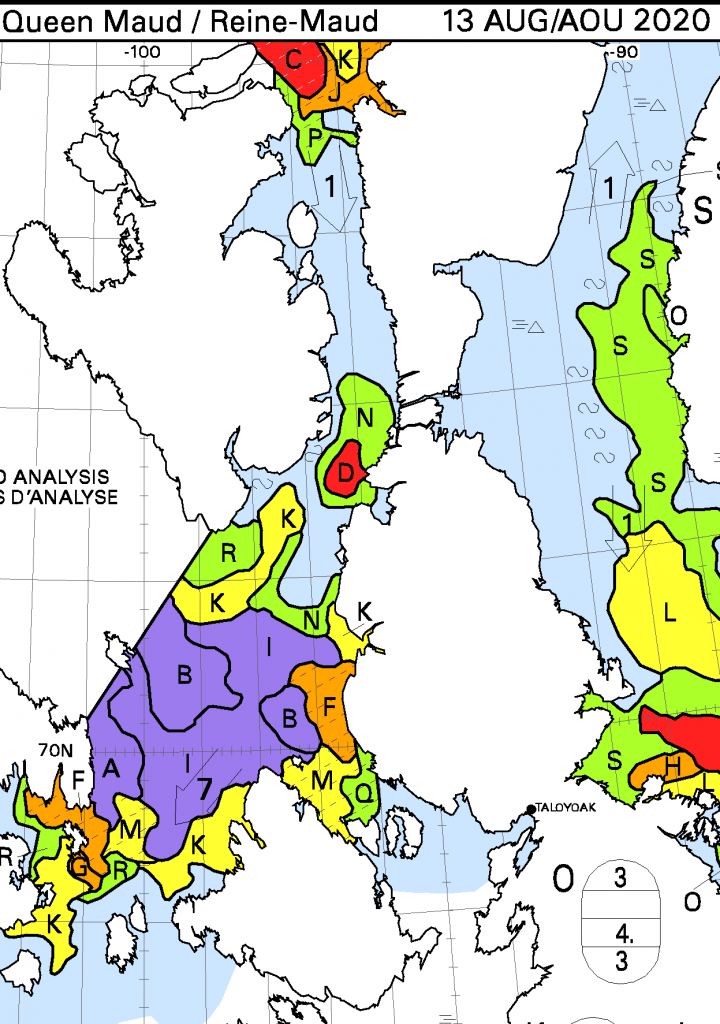 Route 6 is open once again, and it is also now possible to take a circuitous route around the north of both Somerset and King William Islands without encountering anything worse than 6/10 concentration ice:

As one door opens, another one closes?

Making one of my periodic visits to MarineTraffic I couldn’t help but notice a “pleasure craft” approaching Bellot Strait!

Firing up a search engine revealed this intriguing news on CBC:

According to the Canadian government, he has no business being there. But 72-year-old Peter Smith is sailing the Northwest Passage anyway, in violation of COVID-19-related orders prohibiting most foreign yachts from entering Canadian waters.

Since June 1, Transport Canada has prohibited pleasure craft from operating in Arctic waters “to better protect Arctic communities” from the spread of COVID-19.

But according to a Facebook post on Aug. 20, Bobby Klengenberg, a local observer with the Inuit Marine Monitoring Program, spotted Smith’s custom yacht, the Kiwi Roa, off the coast of Cambridge Bay, Nunavut.

Transport Canada confirmed the sighting in an email to CBC News, and said the vessel was told “to depart Canadian waters and not make landfall.”

A spokesperson said the Canadian Coast Guard will “monitor the vessel’s transit out of the region.” If Smith is indeed found to have broken the law, they wrote, the agency “will not hesitate to take appropriate enforcement action,” including penalties of up to $5,000.