A brief history of scientific “churnalism” in the age of social media. The “post-truth” of The Guardian’s 11th Key Science Moment of 2016.

On November 7th 2016 we broke this astonishing news on Twitter:

Global #SeaIce area is at an astonishingly low level for the date: https://t.co/uhiBXcY8C8 pic.twitter.com/mCKkTGXYdO

Nobody noticed! Then on November 16th 2016 Zack Labe did likewise:

This is not normal. Global #seaice area…

The story got some legs. Zack got pushback from some “skeptics” and then the AGU blogged about the story.:

My attention was called to this issue last week thanks to the Twitter feed of Zack Labe, a PhD student in Earth Systems Science at the University of California – Irvine. He makes great graphics showing the latest data on polar climate.

Then he got interviewed by the AGU. The AGU linked back to the graphic graphic in question in the clouds at Google, but there was no mention of our November 6th article or the real source of the story. The Arctic Sea Ice Forum (ASIF for short).

It’s now December 18th, and as far as I’m aware that remains the case in the mainstream media (MSM for short). The Arctic Sea Ice Forum grew out the earlier Arctic Sea Ice Blog (ASIB for short). The proprietor of both the ASIB and ASIF has been revealed by CBC to be one Neven Curlin. They recently interviewed Neven, and even gave him top billing above Sir David Attenborough in the resulting podcast:

However the title of the CBC article is inaccurate, as CBC would surely have noticed if they’d read Neven’s article on the ASIB on the topic of his “sabbatical”.

Now comes news that the “astonishingly low level” of global sea ice area that we brought to the waiting world’s attention on November 7th has today been chosen by The Guardian as one of their:

The story outlined above and the associated graphic graphic are conspicuous only by their absence, but the Grauniad have thoughtfully provided this pretty stock photo of some sea ice: 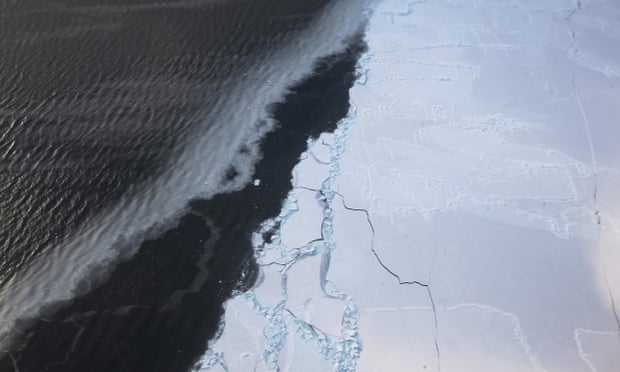 Scroll down the Guardian’s article to number 11, pausing to read Tamsin Edwards’ section on atmospheric carbon dioxide levels at number 9 on the way down (unlike CO₂ concentrations). There you will discover Professor Andrea Sella’s opinion that:

In October, unprecedented weather patterns drove icy winds across Siberia, pushing Arctic temperatures up to 20C above normal and parts of the Arctic Ocean failed to refreeze; in the Antarctic, sea ice thawed faster than usual. For me the bombshell came from a Dutch blogger in late November: a plot of the Arctic plus Antarctic showed sea ice this autumn to be tracking 4m km2 (the size of western Europe) below the normal average. This is a 7-sigma event – with a chance of about one in a hundred billion of being random. The ice doesn’t lie. If we don’t take this seriously now, our children will ask us why.

Here’s the current state of play: 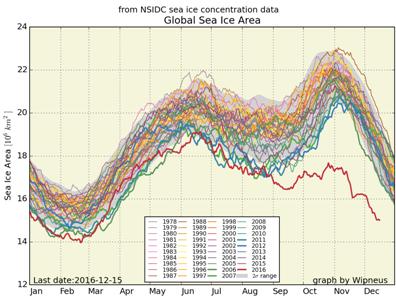 Are your children asking “Why?” yet?

Should anybody wish to pose that question on Twitter please see: