I recently found myself in an extended discussion on Professor Judith Curry’s “Climate Etc.” blog with Tony Brown. Tony asserts that:

In 1932, a Soviet expedition led by Professor Otto Yulievich Schmidt was the first to sail all the way from Arkhangelsk to the Bering Strait in the same summer without wintering en route. After a couple more trial runs, in 1933 and 1934, the Northern Sea Route was officially defined and open and commercial exploitation began in 1935. The next year, part of the Baltic Fleet made the passage to the Pacific where armed conflict with Japan was looming.

Are you SERIOUSLY suggesting that the northern sea route was not operable from the 1930’s onwards?

I’m still awaiting your pick of the year in the 1930s in which the NSR was most “open”. I have a sneaking suspicion it won’t conform to, for example, the current Canadian Ice Service definition.

I won’t bore you with the long list of questions I asked Tony that he has thus far failed to answer. Instead let’s take a closer look at the history of the Northern Sea Route than Tony is willing and/or able to undertake. Perhaps the most obvious place to start is the “History of the Northern Sea Route“? However this does rather gloss over the 1930s. For our initial reference let’s see what Bill Barr has to say in his “The Drift of Lenin’s Convoy in the Laptev Sea, 1937 – 1938″, published in 1980.

Only a few months after Sibiryukov‘s limited success in her attempt at a one-season passage of the Northern Sea Route, so eloquently embodied in her final emergence from the ice of the Chukchi Sea under improvised sails, on December 17, 1932 Sovnurkom (the Soviet of Peoples’ Commissars) took the momentous step of forming the Chief Administration of the Northern Sea Route (Gluvnoye Upruvleniye Severnogo Morskogo Puli), more commonly known as Gluvsevmorput’. Its primary task was to establish safe, reliable navigation from the White Sea to Bering Strait, but in a series of subsequent decrees over the next few years it also acquired a remarkable array of ancillary functions, and along with them, remarkably wide powers. In effect Gluvsevmorput’ was given almost complete control of the entire vast area of Siberia north of 62″ (the latitude of Yakutsk) not only in terms of transport and economic development, but also education, health services and cultural development. Even with these extensive powers, however, the new organization’s first attempt at demonstrating that it was capable of tackling its primary task was a disastrous failure. In her attempt at making a one-season passage of the Northern Sea Route in the summer of 1933 the steamer Chelyuskin became beset in the ice of the Chukchi Sea, and after drifting helplessly for several months, was ultimately crushed and sank on February 13, 1934. However, the new organization’s reputation was definitely redeemed the following year when the icebreaker Fyodor Litke reached Murmansk on September 20, 1934, having succeeded where Chelyuskin had so utterly failed.

Next let’s take a look at Bill Barr’s “The First Soviet Convoy to the Mouth of the Lena“, published in 1982:

On 1 October 1932 the icebreaking steamer Sibiryukov emerged from the ice in Bering Strait having completed the first one-season passage of the Northern Sea Route from Arkhangelsk. It was not an unqualified success, however; Sibiryakov had lost her propeller two weeks previously and had managed to reach the edge of the ice only under improvised sails and with a large measure of luck.

Moving on to another 1933 “trial run” Bill informs us that:

In 1933 the newly-formed Gluvsevmorput’ dispatched the first convoy of freighters via the Northern Sea Route to the mouth of the Lena to deliver cargoes bound for the Yakut ASSR. It consisted of three freighters and was escorted by the icebreaker Krasin. Despite heavy ice conditions in the Kara Sea two of the ships reached Tiksi, their destination, and unloaded their cargoes. The third ship, bound for Bukhta Nordvik with an oil exploration expedition, ran aground near its destination and turned back. Severe ice conditions in Proliv Vil’kitskogo forced all three ships to winter at the Ostrova Samuila. A shore station was built and a full scientific programme maintained all winter. Urvantsev, the chief scientist, took the opportunity to make a winter reconnaissance survey of the northern portion of Poluostrov Taymyr using half-tracks. The convoy was freed from the ice by the icebreaker Fyodor Litke in the summer of 1934 and having completed their tasks all three ships ultimately returned safely to Arkhangel’sk.

Not exactly an unqualified success either then, and certainly not a single season transit of the full Northern Sea Route! However despite all her assorted trials and tribulations the icebreaker Fyodor Litke did manage to complete a single season transit from Vladivostok to Murmansk, and according to Wikipedia “became a Soviet propaganda icon”.

Returning to Barr 1980, we discover that:

In the summer of 1935 Fyodor Litke escorted the first two laden freighters, Vantsetti and Iskra, through the Sea Route from west to east; sailing from Leningrad on July 8, they reached Vladivostok on October 8. Meanwhile two other steamers, Anadyr’ and Stalingrad, made the through-passage in the opposite direction, sailing from Vladivostok on July 23 and 25 and reaching Leningrad on October 16.

The following season (1936) saw a spectacular increase in activity along the Northern Sea Route; a total of 160 ships travelled parts of the route (the bulk of them from the west to the mouth of the Yenisey and back), while 16 vessels made the through-passage, 14 from west to east, and 2 from east to west, the latter being Vantsetti and Iskra homeward bound to Leningrad. The ships heading east included the first Soviet warships to utilize the Northern Sea Route, the destroyers Voykov and Stalin, escorted once again by Fyodor Litke

The plans for the 1937 season were equally ambitious, but by then the run of luck had ended. Due to a combination of abnormally severe ice conditions and some very unfortunate decisions as to routing of convoys and deployment of icebreakers towards the end of the season, 25 ships were obliged to winter on an emergency basis at various points in the Soviet Arctic. Perhaps the most critical aspect, however, was that of Gluvsevmorput’s fleet of icebreakers; only one, the veteran Yermak was not forced to winter in the Arctic.

One of the other questions I asked Tony Brown over at Prof. Judy’s was:

It would be helpful if you selected an ice chart from the 1930s to illustrate your point.

Tony still hasn’t got around to doing that, so why don’t we take a look at the August 1936 chart from the archives of the Danish Meteorological Institute: 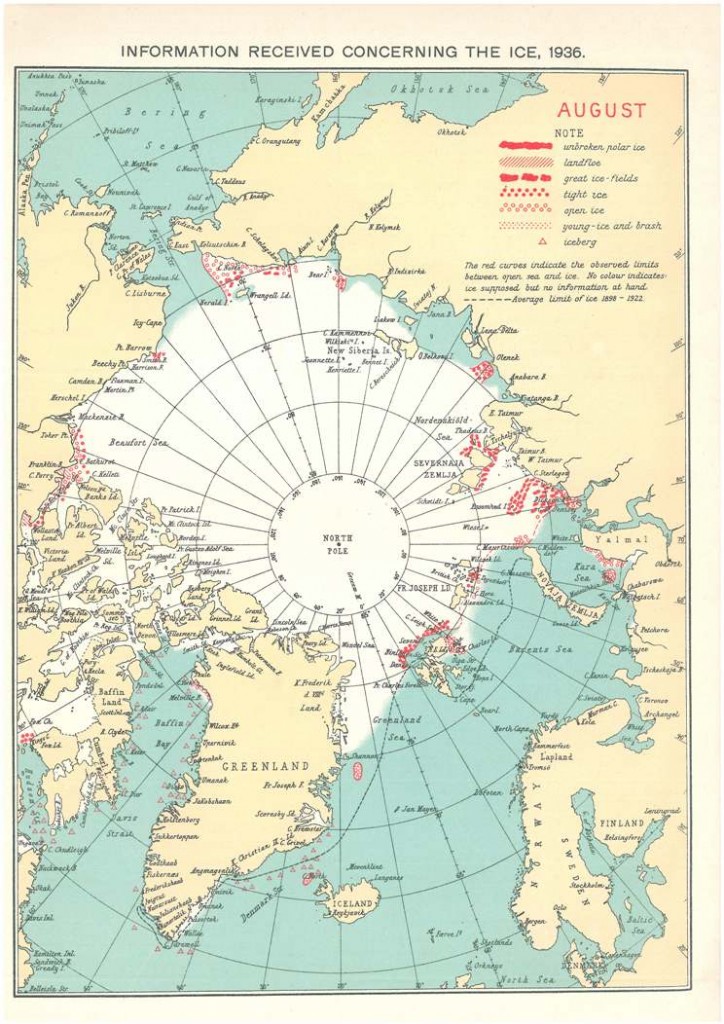 It certainly doesn’t look to me as though the entire Northern Sea Route was covered by no more than 3/10 concentration sea ice in August 1936. For comparison purposes here’s the Russian Arctic and Antarctic Research Institute ice chart for the end of August 2016: