According to the MOSAiC Expedition’s web site:

In September 2019, the German research icebreaker Polarstern will set sail from Tromsø, Norway, to spend a year drifting through the Arctic Ocean – trapped in ice. The goal of the MOSAiC expedition is to take the closest look ever at the Arctic as the epicenter of global warming and to gain fundamental insights that are key to better understand global climate change.

In essence Polarstern will be following in the illustrious footsteps of Tara and Fridtjof Nansen‘s Fram before her, but with vastly more scientists in attendance than previous transpolar drift expeditions.

Hundreds of researchers from 19 countries take part in this exceptional endeavour. The MOSAiC expedition will bring a modern research icebreaker close to the north pole for a full year including for the first time in polar winter. The data gathered will be used by scientists around the globe to take climate research to a completely new level.

The expedition also bears a lot of resemblance to the more recent Norwegian Young Sea ICE Expedition, during  which R/V Lance drifted embedded in winter sea ice, albeit nearer the North Atlantic.

The countdown to “the largest polar expedition in history” has begun: 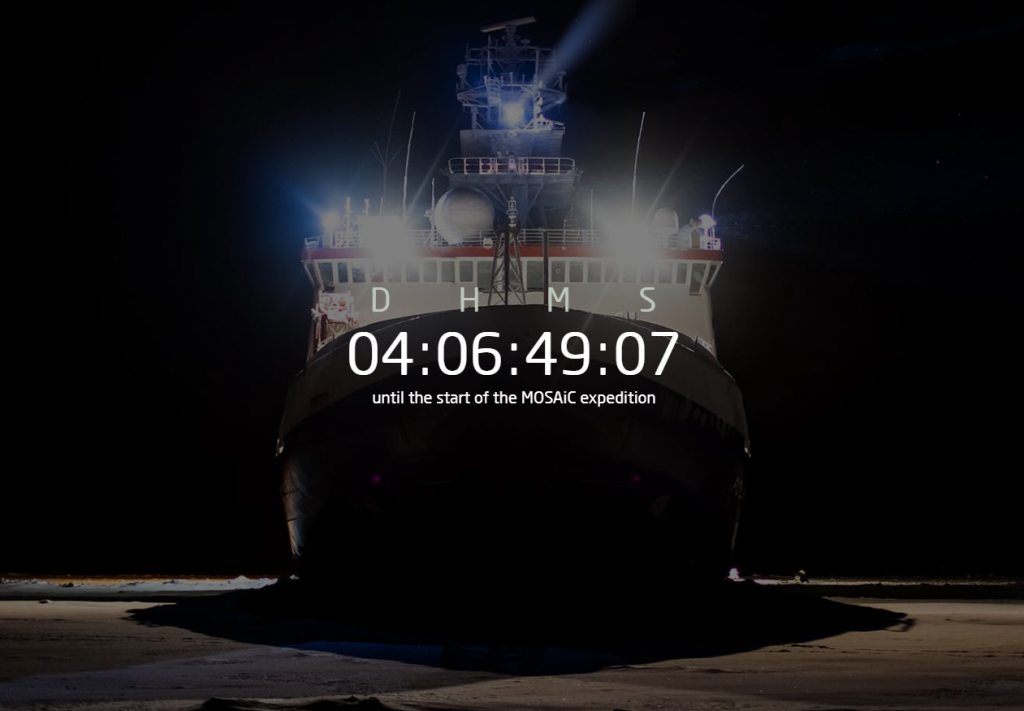 Here’s an infographic to help explain what happens next: 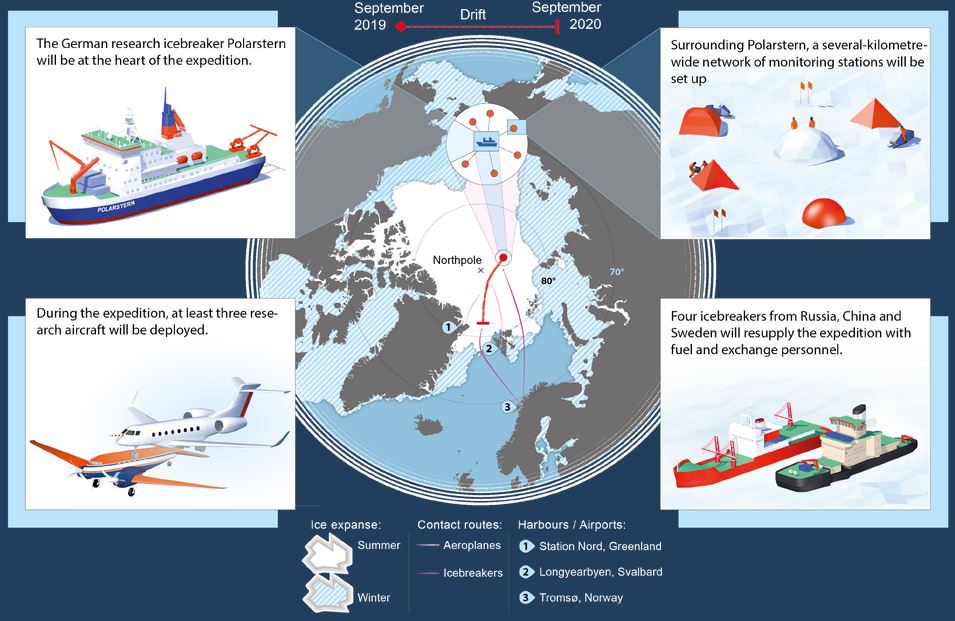 The moment has arrived. The countdown is complete and the MOSAiC expedition begins today. According to the expedition web site:

After a decade of preparations, it’s finally time: this evening at 8:30 p.m. the German icebreaker Polarstern will depart from the Norwegian port of Tromsø. Escorted by the Russian icebreaker Akademik Fedorov, she will set sail for the Central Arctic. On board researchers will investigate a region that is virtually inaccessible in winter, and which is crucial for the global climate. They will gather urgently needed data on the interactions between the atmosphere, ocean and sea ice, as well as on the ecosystem. Thanks to the collaboration between international experts, the one-year-long ice drift past the North Pole will take climate research to a completely new level. 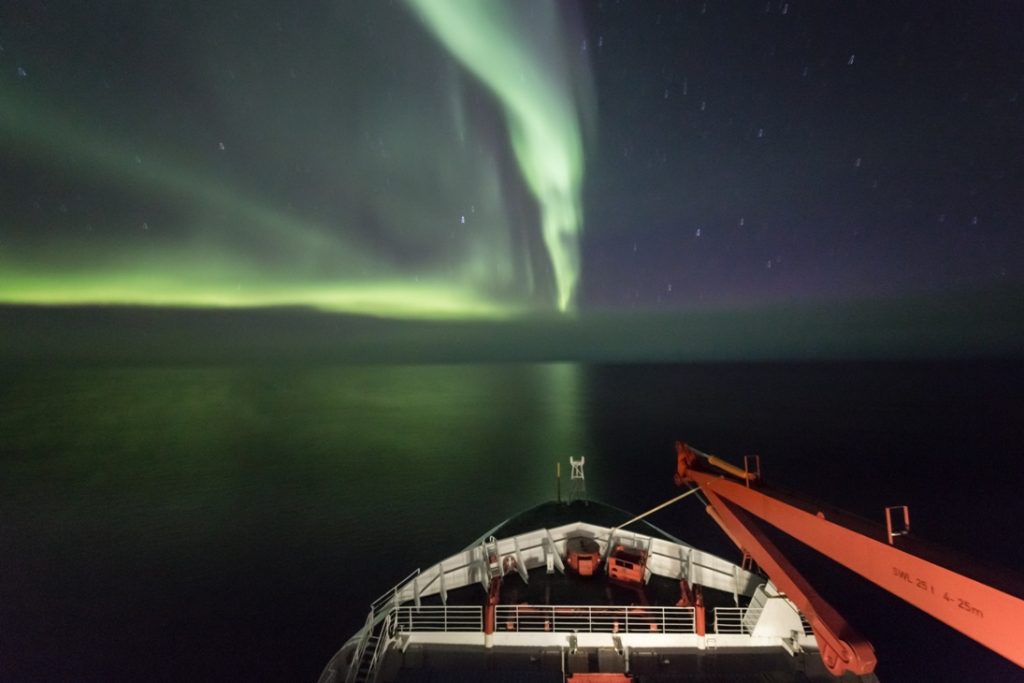 At the launch of MOSAiC Markus Rex, Head of the expedition from the Alfred Wegener Institute said that:

This mission is ground breaking. Never before has there been such a complex Arctic expedition.  For the first time we will be able to measure the climate processes in the Central Arctic in winter. And so for the first time we will be able to understand this region and correctly represent it in climate models. The Arctic is the epicentre of global warming and has already undergone dramatic changes. And it is the weather kitchen for our weather in Europe. Extreme weather conditions like outbreaks of cold Arctic air here in winter, or heat waves in summer are linked to the changes in the Arctic. At the same time, the uncertainties in our climate models are nowhere bigger than in the Arctic. There aren’t any reliable prognoses of how the Arctic climate will develop further or what that will mean for our weather. Our mission is to change that. 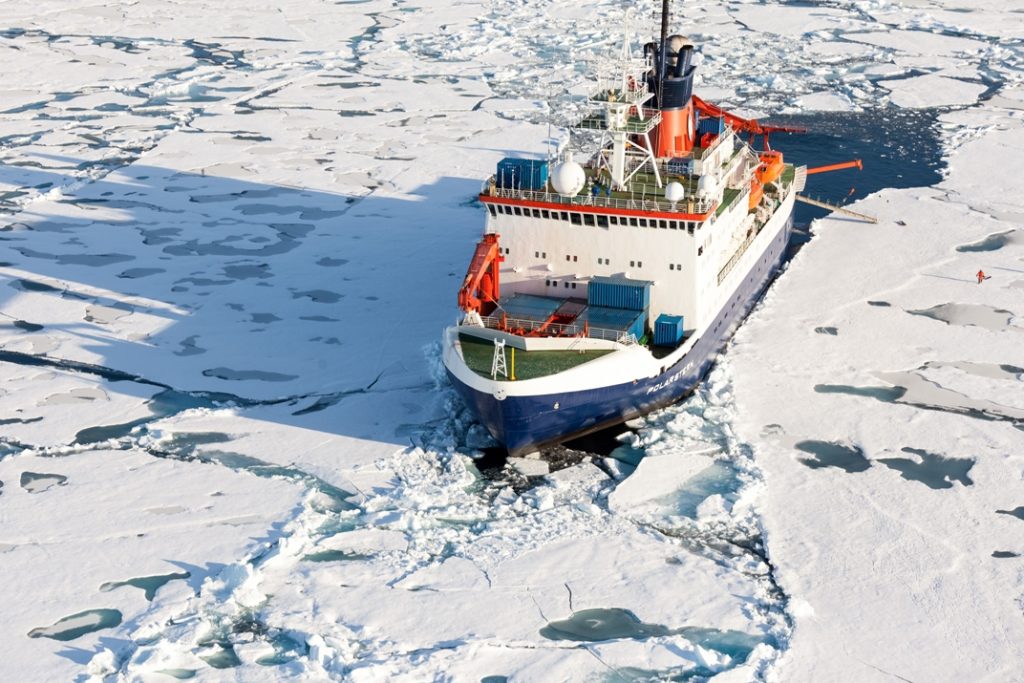 Here’s the Alfred Wegener Institute’s 3 hour plus recording of the send off for Polarstern and Akademik Federov from Tromsø:

Here too are some alternative sources of information about the expedition:

Polarstern is now within the initial target area, and is looking for a suitable ice floe to  which she can attach herself: 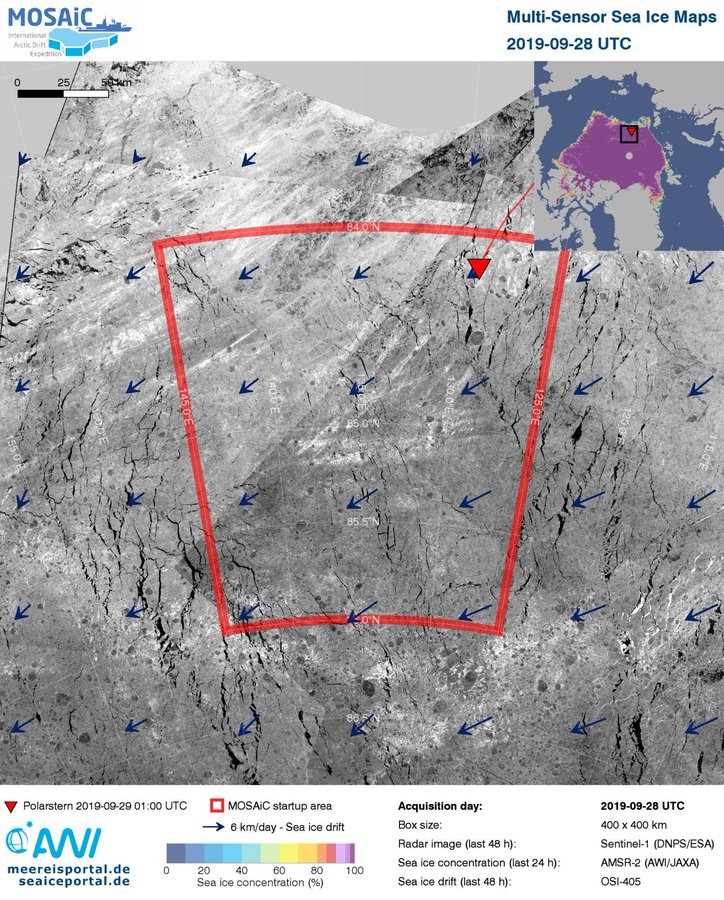 Together with some other scientists, the head of MOSAiC, Markus Rex, flies over from #Polarstern to Akademik Fedorov, where they plan the next steps of searching for the right ice floe. #MOSAiCexpedition #Icedrift #Arctic

Polarstern and Akademik Fedorov are still searching for a suitable sea ice floe:

According to an article by Janek Uin  from Brookhaven National Laboratory on the United States’ Department of Energy Atmospheric Radiation Measurement web site:

We finally found the piece of ice that will be the home for Polarstern for the next year. It’s a floe a few kilometers in diameter and with thickness ranging from half a meter to a few meters. Several ice floes were surveyed via helicopters from both icebreakers and by teams of scientists taking measurements on ice before a decision to pick this one was made. Now the two icebreakers are tied together as equipment, fuel, and people are transferred between the ships in preparation for deployment. While it’s exciting to see many new faces on Polarstern, we also had to say goodbye to some of the friends we had made on our way here.

There was also a lot of excitement today as two polar bears—a mom with her cub—wandered very close to Polarstern. Everybody who could rushed to the deck to try to capture photos of them in the diminishing daylight. 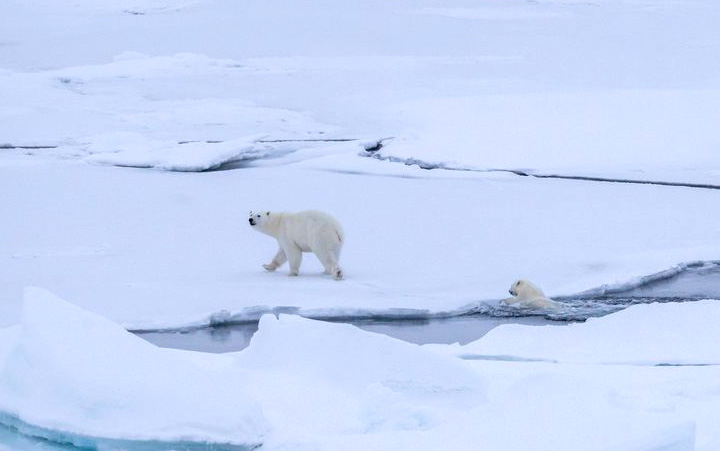 On Friday evening at 9:30 p.m. boat time the team of #MOSAiCexpedition reached their destination: the floe which had been chosen some days before. #Icedrift #Arctic

3 thoughts on “The MOSAiC Expedition”