The United Kingdom Government has just published details of its Foresight “Future of the sea” project’s investigation into the implications of declining Arctic sea ice. According to the overview:

The Arctic is losing sea ice at a dramatic rate and this decline is expected to continue. This is creating opportunities for shorter global trade links between East Asia and the UK, via the Arctic.

Arctic routes are seasonally open most years, although normally icebreaker ships are required and available routes are close to the coast. Currently the Arctic shipping season is short and highly variable with optimum conditions in September and/or October.

Due to climate change, the Arctic shipping season could become three times longer and more reliable, so that by mid-century it will likely be possible to directly cross the North Pole during late summer. During this time, voyages from East Asia to the UK could save 10 to 12 days by using Arctic routes.

However, the extra costs associated with operating in the harsh Arctic environment may detract from their appeal.

The full report goes into much greater detail. According to the executive summary:

There are mixed views on whether trans-Arctic routes will become economically viable. The Russian government wishes to develop the Northern Sea Route as a commercial enterprise and offers substantial fee-based services such as ice-breaking support and pilotage, which are certainly necessary for future investment and development of the route. However Arctic transport is also likely to grow due to increased destination shipping to serve natural resource extraction projects and cruise tourism.

The UK is well positioned, geographically, geopolitically, and commercially, to benefit from a symbiotic relationship with increasing Arctic shipping. The UK has a prominent role in Arctic science and a world-leading maritime services industry based in London, including the International Maritime Organization (IMO), one of the world’s leading financial centres, and Europe’s largest insurance sector. Arctic economic growth is focused in four key sectors – mineral resources, fisheries, logistics, and tourism – all of which require shipping, and could generate investment reaching $100bn (US Dollars and hereafter) or more in the Arctic region over the next decade. The UK had a fundamental role in preparing the UN IMO Polar Code which came into operation in January 2017. The Polar Code is an historic milestone in addressing the specific risks faced by Arctic shipping and acts to supplement the existing Safety of Life at Sea (SOLAS) and Marine Pollution (MARPOL) conventions for protecting the environment while ensuring safe shipping in international waters.

Much of the investment into Arctic shipping projects is from China but northern European countries are also playing an increasing role. Potential opportunities for the UK include the development of UK-based Arctic cruise tourism, and a UK-based trans-shipment port – transferring goods from ice-classed vessels to conventional carriers. The UK’s active diplomatic role in many international organisations means it is well placed to ensure that increased activity in the Arctic is accomplished in line with established UN maritime conventions, many of which were written with significant UK contributions. The UK’s leading role in Arctic science has wide reaching positive implications for international collaboration. To enhance predictions of the future Arctic, further developments in climate modelling and science are required.

From the concluding remarks:

If anthropogenic greenhouse gas concentrations can be reduced sharply in line with the UN Paris climate change agreements, Arctic ice melt and shipping opportunities will still continue to increase for the majority of the 21st century. However, even with continually increasing greenhouse gas concentrations, climate models suggest there will always be some Arctic sea ice during winters through the 21st century. Although the Arctic shipping season length and reliability is likely to increase dramatically, for the vast majority of the current global shipping fleet sailing trans-Arctic will remain a seasonal endeavour. Based on the current activity and physical climate changes this suggests that trans-Arctic shipping is likely to increase, focused on the Northern Sea Route; however, it is likely to remain a niche market for specialist operators.

Finally, for the moment at least, here’s the latest IMO video on search and rescue in the polar environment:

The emphasis in the video is on Antarctica, but one cannot help but wonder when the next search and rescue operation will take place in the Arctic. Later this summer perhaps? Note that under the new Polar Code avoiding the use of heavy fuel oil is mandatory in the Antarctic, but merely “encouraged” in the Arctic: 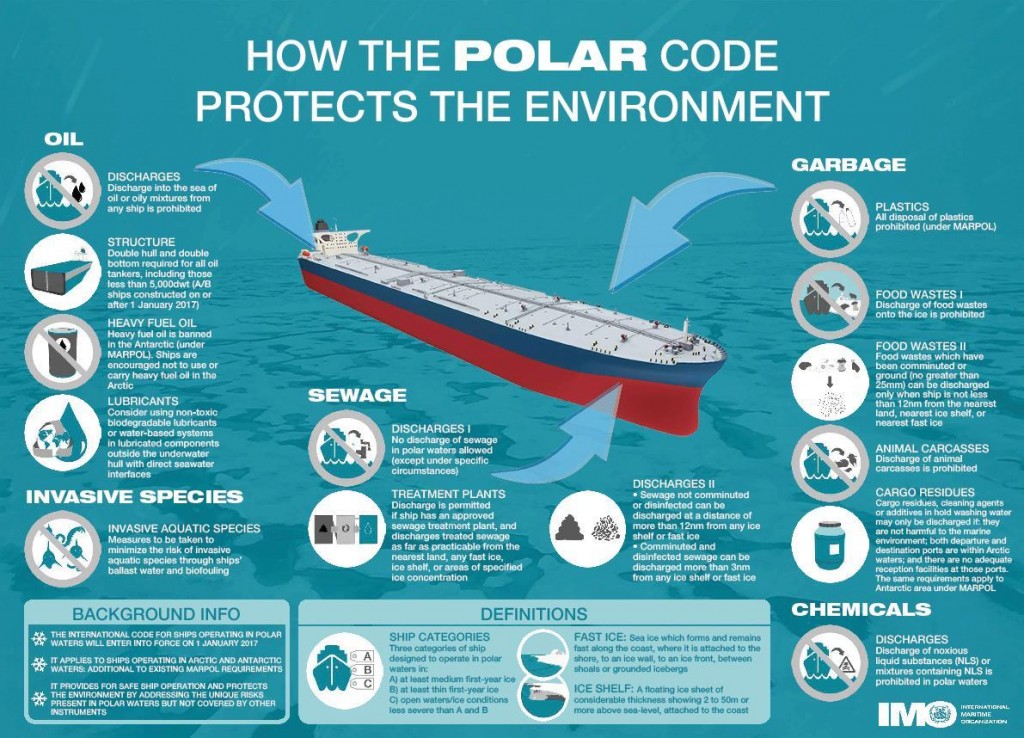