Halloween is a little way away still, but nonetheless I have a horror story to tell you. Are you sitting comfortably?

As our regular reader(s) will be aware we have been following the fortunes of the plucky little yacht Northabout on her Arctic circumnavigation with great interest. That includes the series of reports about the voyage on the BBC Radio 4 Today programme. Even recent passers by may have noticed that we were none too pleased with the most recent episode in the series!

Now comes news that one of the numerous usual suspects has been blathering about both the Polar Ocean Challenge expedition and that BBC Radio 4 programme. Enter stage right James Delingpole at Breitbart. Under the catchy but erroneous headline:

James assures his faithful followers that:

The Polar Ocean Challenge expedition – aka Ship of Fools II – has escaped from the Arctic by the skin of its teeth. It was supposed to show how amazingly navigable the Arctic Circle has become now that climate change is supposedly melting the polar ice caps at a dangerous and unprecedented rate. But according to one observer who has followed their progress closely (see comments at Paul Homewood‘s place), the intrepid explorers – including a 14-year-old boy – came within just two days of calamity, after being hampered by unexpectedly large quantities of a mysterious substance apparently made of frozen water.

Regular readers will recall that not a lot of people know that Paul Homewood is the proprietor of a production line of porky pies full of horrifying Arctic anomalies. Mr. Delingpole references one batch of such Halloween howlers, wittily entitled:

and in particular a comment thereto which reads as follows:

The southern NWP route is now closed at the NE exit, with northern Prince Regent Sound blocked by 9/10 ice in freeze up mode. Exactly where they barely made it through after hours of probing on 9/12. Northabout made it through NWP with just two days to spare. Had they taken the planned 2 days resupplying in Barrow rather than 1, and the planned one day call at Cambridge Bay (meeting up with Polar Bound), they would not have made it out and would have had to turn around and overwinter at Cambridge Bay. It was that close.

Now how can I put this politely? That is pure unadulterated balderdash. If Mr. Delingpole thinks that a comment on a known “snow blind” blog constitutes evidence of anything he needs one of his heads examined. Deconstructing all the mistakes in just this one article about both Northabout and the BBC’s climate change coverage will involve a series with more episodes than BBC Radio 4s! However we have to start somewhere, so let’s examine this assertion first shall we?

Paul Homewood notes… it’s also the earliest minimum since 1997, indicating that the Arctic is currently experiencing a very cold spell.

Have I got news for you James, Paul and Ristvan? Oh no it [expletive deleted] isn’t! 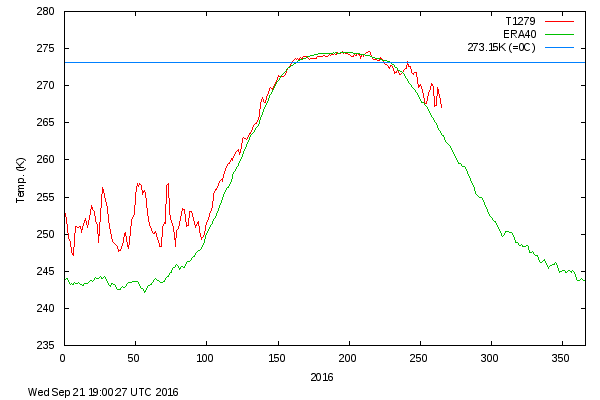 Some skeptical fellows over on Twitter disagreed with me about the facts of the matter. This is how that “debate” proceeded:

In other news Anthony Watts has today published a guest post about Arctic sea ice by one Caleb Shaw on his Watts Up With That blog. I thought I’d pose Paul and Caleb some relevant questions, but a team of Gremlins seem to have been hard at work stealing my pertinent comments before the assorted [mods] could approve them. By way of example, from Breitbart: 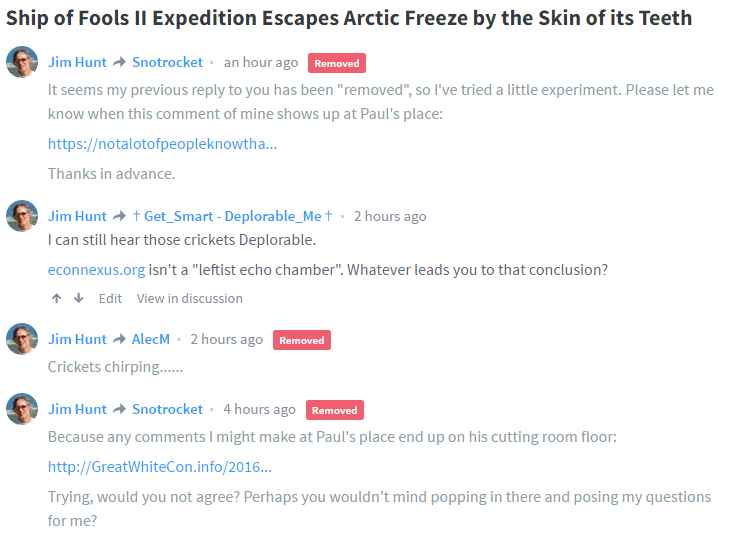 From “Not a Lot of People Know that” 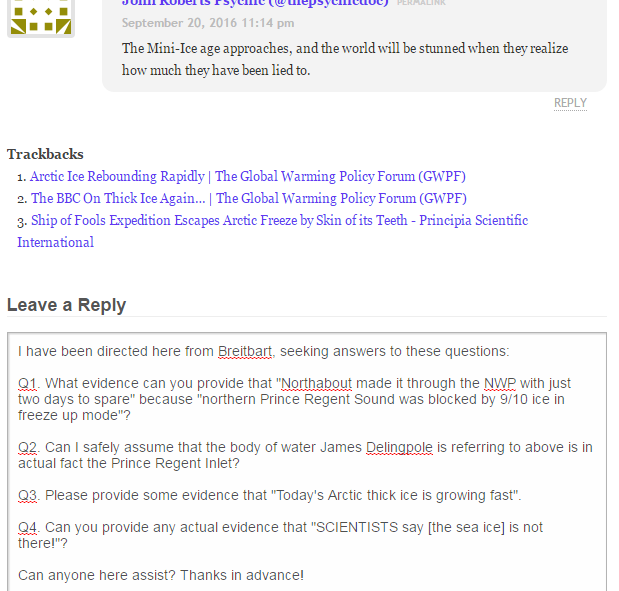 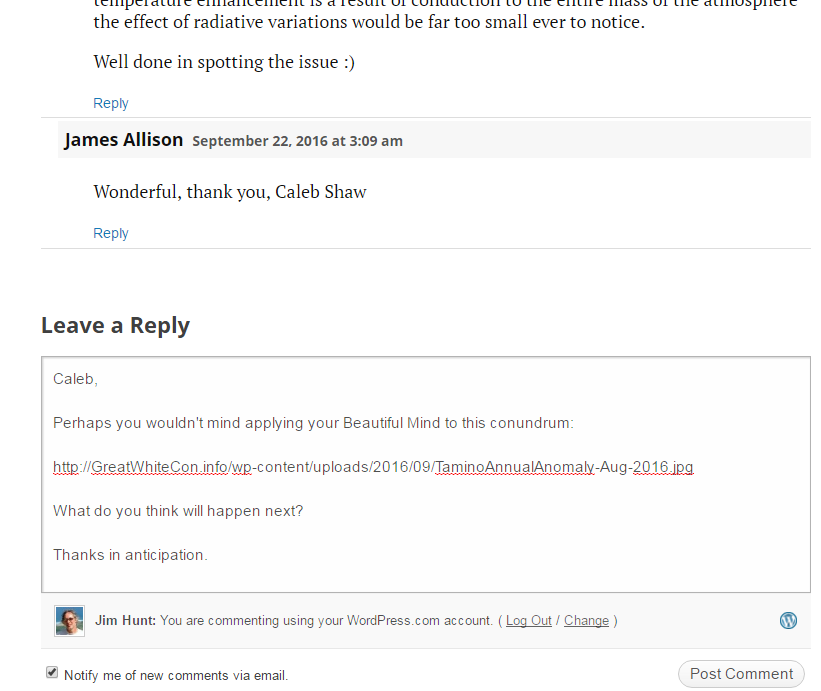 Anthony Watts has published another Arctic sea ice article today. The Gremlins have grabbed another comment of mine! 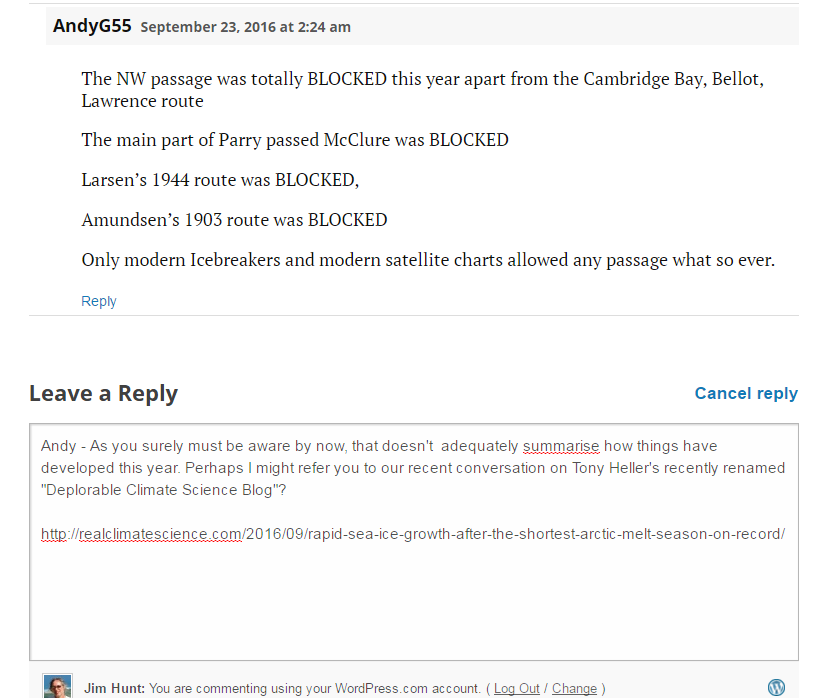