In a blog post earlier this year entitled “IPSO, the press regulator created in the aftermath of the Leveson Inquiry, is not up to task” Bob Ward, Policy and Communications Director of the Centre for Climate Change Economics and Policy at the Grantham Research Institute, made a prophetic statement:

IPSO is also currently considering a complaint I made against another article by David Rose in The Mail on Sunday in September 2014 which wrongly suggested that Arctic sea ice extent has stopped declining. I am not optimistic that my complaint will be upheld, even though the newspaper again breached Section 1(i) of the Editors’ Code of Practice.

IPSO have now published their ruling on that complaint, and conclude that:

17. The complaint was not upheld.

By all means read the ruling in full, but here are our edited highlights:

13. The article presented the author’s view that forecasts regarding the melting of Arctic ice had overestimated the rate of decline. The complainant did not dispute that measures showed that the Arctic ice extent had increased over the last two years. The article had made clear that the long-term trend still showed a decline, and the coverage had included commentary from a number of scientists, expressing a variety of views on the matter, including one who had stated that he was “uncomfortable with the idea of people saying the ice had bounced back”, and warned against reading too much into the ice increases. The article had made clear that scientific opinions regarding the significance of the most recent data varied. In this context, the omission of the information that the measure in 2012 had been the lowest on record, and that 2014 had still been the seventh lowest since records began, was not significantly misleading. The article did not suggest that it had been established as fact that the long-term decline in Arctic sea ice had reversed.

I highlight that paragraph in particular because in our coverage of David Rose’s article here at Great White Con we have disputed that “measures showed that the Arctic ice extent had increased over the last two years”. I wonder what IPSO might make of that information?

The Guardian have recently published an article by Dana Nuccitelli on the IPSO ruling entitled “Ipso proves impotent at curbing the Mail’s climate misinformation“, which now contains this addendum:

We have appended the following response from Rose:

“Like anyone who challenges aspects of the so-called ‘consensus’ over climate change, I’ve grown inured to being called a ‘denier’, as some of the commenters ‘below the line’ claim I am here. It is with some weariness that I must point out, as I did in the article that started this fuss, that I accept that the long-term Arctic ice trend is down, that carbon dioxide of human origin is an important cause of this trend, and that, unchecked, it will lead eventually to ice-free Arctic summers – albeit perhaps not for decades.

“But to be attacked for something I didn’t actually write is unfortunate. The fact remains there are large uncertainties and intense debate among scientists on this and other climate change topics, even if, as has been said, 97 per cent agree that the world is warming and that humans are partly to blame. But that doesn’t take us very far, and there are important differences of opinion. Professor Judith Curry isn’t a ‘contrarian’ but a very distinguished scientist and ice expert with a long record of peer-reviewed publications, though she happens to disagree with Mr Nuccitelli.

We feel compelled to point out to David Rose once again that he actually wrote:

The Arctic ice cap has expanded for the second year in succession.

and that this is both inaccurate and significantly misleading.

Mr. Rose’s comments are also of interest to us because despite recently bringing her attention to the matter once again Professor Judith Curry’s personal blog still contains the inaccurate and/or misleading information first published by the Mail on Sunday on September 8th 2013 in an article by David Rose entitled “And now it’s global COOLING! Record return of Arctic ice cap as it grows by 60% in a year“.

What sort of “very distinguished scientist and ice expert” would continue to proudly proclaim the following inaccurate information after even the Mail on Sunday had retracted it? 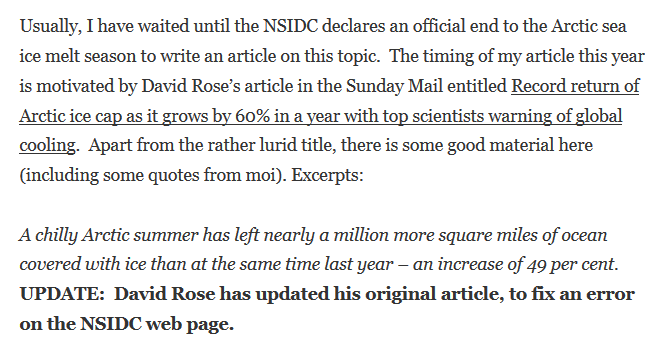