I’m sure we’ll get stuck into to some real science eventually, but for the moment we’re still taking a long, hard look at mainstream media coverage of the latest learned journal article on Arctic sea ice to be misinterpreted by the media. Compared to some others one might mention the report on the BBC web site about the new CPOM paper in Nature Geoscience entitled “Increased Arctic sea ice volume after anomalously low melting in 2013” was relatively accurate. Entitled “Arctic ice ‘grew by a third’ after cool summer in 2013“, it said that:

Researchers say the growth continued in 2014 and more than compensated for losses recorded in the three previous years.

The scientists involved believe changes in summer temperatures have greater impacts on ice than thought.

But they say 2013 was a one-off and that climate change will continue to shrink the ice in the decades ahead.

The Arctic region has warmed more than most other parts of the planet over the past 30 years.

Satellite observations have documented a decrease of around 40% in the extent of sea ice cover in the Arctic since 1980.

The researchers used 88 million measurements of sea ice thickness from Cryosat and found that between 2010 and 2012, the volume of sea ice went down by 14%.

They published their initial findings at the end of 2013 – but have now refined and updated them to include data from 2014 as well.

Desperately hoping that the BBC might be able to explain this conundrum to us we avidly listened to Adam Rutherford’s interview with Rachel Tilling, the lead author of the paper in question, on BBC Radio 4’s “Inside Science” programme last night. We were also hoping that at long last there might be some quantification of what’s happened to the VOLUME of “sea ice cover in the Arctic since 1980”. Sadly all our hopes were dashed, and Adam never posed the vital questions.

You can download a recording of the broadcast from the link above. Adam’s interview with Rachel starts at 7:00 minutes. He begins by talking about:

The publication in Nature Geoscience this week of a new paper that shows that in 2013, which was a slightly cooler summer than average, Arctic ice had grown, not just a tad, but by a WHOPPING 41% on the previous year!

Rachel Tilling then begins by saying:

The thickness and the volume are actually the most important measurements we can get, because the area’s been really, really useful in giving us an overview of how the Arctic is changing, but it only really gives us half the picture.

Here’s the full picture, taken from our Arctic Sea Ice Graphs page. Since CryoSat-2 measurements only go back as far as 2010, this graph shows Arctic sea ice volume calculated by the PIOMAS model developed by the Polar Science Center at the University of Washington: 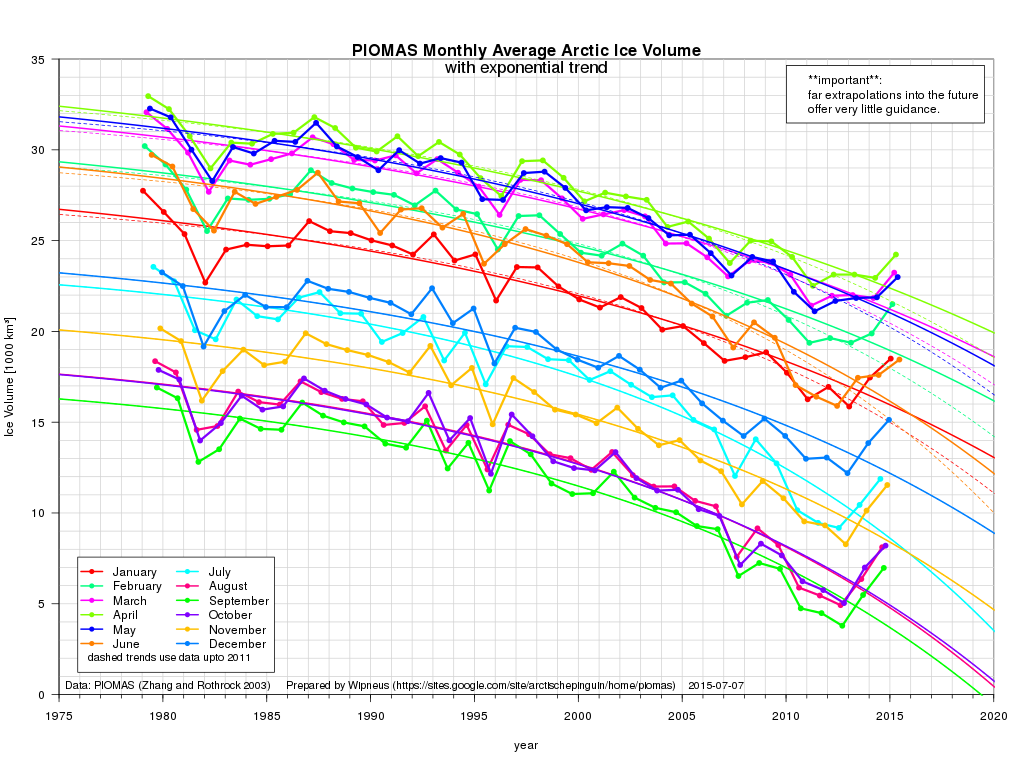 Is that WHOPPING increase in Arctic sea ice volume from 2012 to 2013 clear to you now? At 11:00 minutes into the programme Adam says:

You can see how this is going to be interpreted. You know, with 30 years of Arctic sea ice shrinking, and then suddenly it gets bigger, you’re still OK with climate change being a real thing, and global warming being a real thing?

I can see that very clearly Adam, thanks for asking, and YES is the answer to your final question. It still wasn’t clear to me whether that would be clear to Adam’s listeners however, so I posed a pertinent question on Twitter first of all:

That didn’t elicit any response, so then I tried following Adam’s instructions at the end of the interview to:

Do let us know what you think – [email protected]

This is what I thought:

Further to your recent interview with Rachel Tilling, and your joint Twitter conversation with my alter ego “Snow White”, I’d like to reiterate how disappointed the two of us are that during your conversation with Rachel there was no mention of “41% of nothing”. Twitter speak for “Doesn’t anybody at the BBC have the faintest idea what Arctic sea ice volume was 30 years ago, in April and in October?”

and this is the response I got from BBC Inside Science:

Thank you very much for your email. While all emails are read – and we appreciate input from listeners – we cannot reply to each one individually. There are simply too many!

For more information about Inside Science, please go to our webpage:

Once you have located a particular programme page, you will see a link to ‘Listen now’- on the picture of Dr. Adam Rutherford.
‘Related Links’ are found further down on the right hand side of the page.

Downloads/Podcasts of Inside Science are available at:
http://www.bbc.co.uk/podcasts/series/inscience

Thanks again and do keep sending your comments in – listener feedback helps us make better programmes for you.